The World Health Organization (WHO) today called an emergency meeting for Monday on the “dramatic” rise in Zika virus infection – strongly suspected of causing birth malformations – warning that its “explosive” spread could eventually infect up to four million people before it is brought under control.

“The level of alarm is extremely high,” WHO Director-General Margaret Chan told her Executive Board in Geneva, noting that for decades the disease, transmitted by the Aedes genus of mosquito, “slumbered,” affecting mainly monkeys and occasionally causing a mild disease of low concern in humans.

“The situation today is dramatically different. Last year, the virus was detected in the Americas, where it is now spreading explosively. As of today, cases have been reported in 23 countries and territories in the region,” she added in convening an Emergency Committee under the International Health Regulations on the epidemic.

The virus, first reported by Brazil in May, is expected to spread to other parts of the world where dengue, spread by the same mosquito, is also present, said Marcos Espinal, Director of the Department of Communicable Diseases and Health Analysis at the Pan American Health Organization (PAHO), WHO's regional branch.

He told the Board he expects the outbreak, already linked to some 4,000 births of babies with abnormally small heads, a condition known as microcephaly, to grow from current estimates of one million cases to possibly three million to four million before it can be brought under control.

Dr. Chan noted that there is a high level of uncertainty. “Questions abound,” she said. “We need to get some answers quickly. I am asking the Committee for advice on the appropriate level of international concern and for recommended measures that should be undertaken in affected countries and elsewhere. I will also ask the Committee to prioritize areas where research is most urgently needed.”

In some places the virus has been associated with a steep increase in microcephaly and with the sometimes fatal Guillain-Barre syndrome, but a causal relationship with Zika has not yet been established although it is strongly suspected, she added.

“The possible links, only recently suspected, have rapidly changed the risk profile of Zika, from a mild threat to one of alarming proportions. The increased incidence of microcephaly is particularly alarming, as it places a heart-breaking burden on families and communities. WHO is deeply concerned about this rapidly evolving situation.”

She also warned of the potential for Zika to spread even further internationally given the wide geographical distribution of the mosquito vector, and cited the lack of population immunity in newly affected areas and the absence of vaccines, specific treatments, and rapid diagnostic tests.

Moreover, conditions associated with this year's El Niño weather pattern, which causes droughts in parts of the world and floods in others, are expected to increase mosquito populations greatly in many areas. 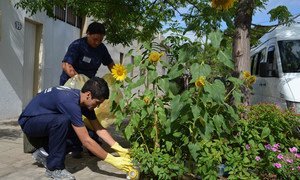 Twenty countries in the Americas and about 10 in Africa, Asia and the Pacific have reported cases of the mosquito-borne Zika virus infection according to information delivered today by the UN World Health Organization (WHO).