UNAMID/Hamid Abdulsalam
On 24 January 2016, officials from the UN-African Union Mission in Darfur (UNAMID) visited Anka and Umm Rai, North Darfur, and interacted with the displaced population who spoke about their concerns regarding the lack of food, shelter, water resources and medical facilities.
27 January 2016

The United Nations today expressed grave concern over the impact of the ongoing hostilities in Darfur on thousands of civilians who have been forced to flee their homes amid the conflict that began two weeks ago.

Initial reports by the UN Office for the Coordination of Humanitarian Affairs (OCHA) indicate that about 19,000 civilians have fled into North Darfur state, and up to 15,000 into Central Darfur state, following fighting in the mountainous Jebel Marra region that straddles three Darfur states.

According to a statement issued by the Africa Union-UN Mission in Darfur (UNAMID), these figures represent more than a 52 per cent increase in just 24 hours, reportedly caused by intensified aerial bombings carried out on Monday.

“The protection of civilians remains our paramount concern during conflict,” said the UN Resident and Humanitarian Coordinator in Sudan, Marta Ruedas, in a separate statement.

“While it is encouraging that some humanitarian assistance is being provided, clearly much more is needed and we are working with our national and international partners on the ground to ascertain how the vulnerable can be helped during this time. We are therefore advocating for safe and unfettered access to provide timely assistance to those in need,” she added.

OCHA indicated that some humanitarian assistance, including nutritional supplements for children, medicine and purified water, has been provided in North Darfur to some of the newly displaced people – the vast majority of whom are women and children. The humanitarian community is also working to provide emergency relief to those displaced in Central Darfur, but the lack of access is preventing the immediate provision of aid.

“While the exact number of civilians who have fled the Jebel Marra is yet to be confirmed, there are also unverified reports of other civilians having sought refuge deeper into the Jebel Marra area,” Ms. Ruedas noted.

Yesterday, UNAMID received information that 19 villages near Rockero, north Jebel Marra in Central Darfur, were burned down during fights. Most residents of these villages are reported to have fled to Sortoni, Kabkabiya and Tawila, while others have sought shelter in surrounding mountains. Many children have also been reported missing. 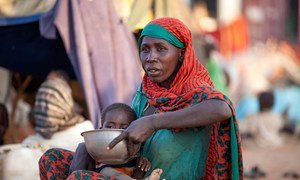 Against the backdrop of renewed military confrontation, the political process to resolve the conflict in Darfur through dialogue remains fragmented with limited progress, the United Nations peacekeeping chief today informed the UN Security Council.