UNHCR/I. Prickett
Syrian refugees fleeing the fighting near the Syrian city of Kobani wait in a holding area before boarding buses in Turkey (September 2014).
26 January 2016

Senior United Nations relief officials working on the front lines of the conflict in Syria stressed today that only a political solution will end the five-year war, insisting that humanitarians have been doing all that they can to assist millions of desperate people who have lost nearly everything and are “now beginning to lose hope that the world cares.”

“The failure in Syria is most definitely not the humanitarian organizations' failure, it is a political failure,” John Ging, the Operations Director for the Office for the Coordination of Humanitarian Affairs (OCHA), told reporters in Geneva at a press briefing.

“That is why we are now looking, with great hope, for this political process to do what is needed, which is to deliver us a solution which will end the conflict and put people back on the track and the path which they deserve,” he added, referring to the intra-Syrian talks scheduled to begin on Friday in the Swiss city.

Describing their work as “heroic,” Mr. Ging said the heads of the Syrian offices of OCHA, the UN Children's Fund (UNICEF) and the World Health Organization (WHO) –Yaacoub El Hillo, Hanna Singer, and Elisabeth Hoff respectively – work with many colleagues who risk their lives on a daily basis to help others, leading convoys into conflict zones.

“We come with a clear message to those coming to Geneva that enough is enough,” declared Mr. El Hillo, the UN Humanitarian Coordinator in Syria.

For her part, UNICEF's Representative said the country is now probably the most dangerous place on Earth to be a child. “Even the simple act of playing is no longer safe,” Ms. Singer said, explaining that a few months ago, 19 children were killed in a playground in Homs as they were celebrating Eid. That same week, six children had been killed when a mortar hit a UNICEF-supported child safe space in Aleppo.

“The impact of the war on children's education has been staggering,” she continued, noting that two million children are out of school, one in four schools can no longer be used and the education system has lost over 50,000 teachers because they had been killed or forced to flee.

“For a country in which school enrolment was 90 per cent before the conflict, Syria has now lost two decades of educational progress,” she underscored, warning that an entire generation of children could be lost, as evidenced by the increasing numbers of young people now becoming involved in the war – manning checkpoints and carrying weapons.

Against this harrowing backdrop, and in the name of the “millions of children trying valiantly to go to school in the country,” Ms. Singer appealed to the parties and those who have influence with them, to let humanitarian workers do their jobs on the ground by providing unhindered and sustained humanitarian access to all parts of Syria.

Taking the floor next, WHO's Representative in the country said the health situation in Syria is deteriorating in front of her eyes. Ms. Hoff warned that not only are medicines and surgical supplies running short – with national forces often seizing water hydration tablets and syringes – but that 50 per cent of health workers have fled the country and 60 per cent of the public hospitals have been destroyed; either closed or partially functioning.

“Access is our main problem: access for health workers to get to work and access for patients to reach health facilities,” she said, adding that patients not only had to navigate checkpoints but that they were often seeking care running through “a rain” of bullets and bombs.

Ms. Hoff also warned that internally displaced people (IDPs) living in shelters with only one toilet for 60 or 70 people, are also being stalked by infectious diseases. She made an impassioned appeal for unhindered access of all health workers, as well as humanitarian pauses to ensure that 2.9 million children in the country are vaccinated.

“We've learned now through these five years, there is no humanitarian solution to this crisis, and I think those who are bombing, attacking, maiming each other and the civilians in Syria have understood there is no military solution,” declared Jan Egeland, Secretary General of the Norwegian Refugee Council and former OCHA chief.

“Every hour in fact that is wasted now, from the talks starting until we get agreements, means another 50 Syrian families displaced from their homes, trudging away in this snow and bitter cold – 50 families every wasted hour,” he warned. 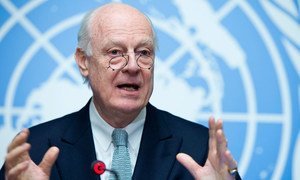 Delayed intra-Syrian talks, brokered by UN, to begin on Friday in ‘uphill’ bid for ceasefire

Intra-Syrian talks that were scheduled to begin in Geneva today under United Nations sponsorship will now start on Friday, with the first priority being a broad ceasefire, humanitarian aid, and halting the threat posed by the Islamic State of Iraq and the Levant (ISIL).