<a href=http://bit.ly/1PvrtnC>Oren Ziv/IRIN</a>
A Palestine Red Crescent Society responder tends to the wounded during a Bethlehem skirmish. Clashes with the Israeli army in the West Bank have left many injured by rubber bullets and tear gas.
26 January 2016

Condemning Palestinian attacks against Israeli civilians, highlighting growing Palestinian frustration at a half century of occupation, and calling on Israel to change its settlement and other policies, United Nations Secretary-General today urged both sides to seize the “historic challenge” of compromise to secure a two-state solution.

“A lasting agreement will require difficult compromises by both the Israeli and Palestinian leaders,” he told the Security Council at the start of a day-long discussion of the Middle East conflict. “Yes – but what are the alternatives? The continuing deadly wave of terror attacks and killings?” he asked, “The possible financial collapse of the Palestinian Government?”

“Ever greater isolation of the Israeli Government? A further deterioration of humanitarian conditions in Gaza and the agonizing build-up to another terrible war? A hollowing of the moral foundation of both Israeli and Palestinian societies alike, a creeping moral blindness that ignores the suffering – and indeed the humanity – of one’s neighbour?” he continued.

“More unilateral acts by each side, intentionally designed to pre-empt negotiations and provoke the other side? The parties must act – and act now – to prevent the two-state solution from slipping away forever,” said the UN chief.

“But security measures alone will not stop the violence. They cannot address the profound sense of alienation and despair driving some Palestinians – especially young people,” he said, stressing that the full force of the law must be applied equally to all who commit crimes, both Israelis and Palestinians alike.

He noted that, as oppressed peoples have shown throughout the ages, it is human nature to react to occupation, which often serves as a potent incubator of hate and extremism, while so-called facts on the ground in the occupied West Bank are steadily chipping away the viability of a Palestinian state and the ability of Palestinian people to live in dignity.

“Progress towards peace requires a freeze of Israel’s settlement enterprise. Continued settlement activities are an affront to the Palestinian people and to the international community. They rightly raise fundamental questions about Israel’s commitment to a two-state solution,” he added, referring to the internationally backed plan for two States, Israel and Palestine, living side by side in peace within secure borders.

“As we continue to uphold the right of Palestinians to self-determination, let us be equally firm that incitement has no place, and that questioning the right of Israel to exist cannot be tolerated,” the Secretary-General stressed.

“Provocative acts,” such Israel’s reported plans for over 150 new homes in illegal settlements in the occupied West Bank and the declaration of 370 acres in the West Bank, south of Jericho, as ‘state land’ are bound to increase the growth of settler populations, further heightening tensions and undermining any prospects for a political road ahead.

Turning to the situation in Gaza, Mr. Ban said that 18 months after the last Israeli war there with Hamas the humanitarian situation remains perilous. He condemned continuing rocket fire into Israel from militant groups and cited relieving the “dire unemployment, water and electricity needs” of Gazans as a top priority.

“I continue to strongly believe that conditions in Gaza pose a severe threat to long-term peace and security in the region,” he said, while also calling for reuniting the West Bank and Gaza under a single legitimate Palestinian authority.

“Some may say the current volatility across the region makes it too risky to seek peace. I say the greater peril is not seeking a solution to the Palestinian question. Some say the two sides are entrenched in their respective positions. I say that we must not succumb to passivity, resignation or hopelessness that a comprehensive resolution of the conflict is not achievable,” Mr. Ban declared in summing up the situation.

“As the wider Middle East continues to be gripped by a relentless wave of extremist terror, Israelis and Palestinians have an opportunity to restore hope to a region torn apart by intolerance and cruelty. I urge them to accept this historic challenge in the mutual interest of peace. The support of regional partners in this pursuit is essential,” he added.

“And finally, the whole international community must be ever more committed to actively help Palestinians and Israelis to rebuild trust and achieve an enduring peace before it is too late,” he said. 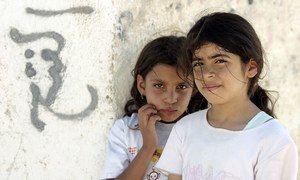 United Nations Secretary-General Ban Ki-moon has called for “substantial policy changes on the ground” by Israel, voicing deep concern at reports that the Government has declared of 370 acres in the occupied West Bank south of Jericho as so-called “state land.”