UNICEF/Alessio Romenzi
Asylum-seekers from Syria, including children, arrive on the shores of the island of Lesbos, in the North Aegean region of Greece.
26 January 2016

“It is clear this humanitarian emergency will continue, at least into 2016, requiring a consistent response throughout Europe with coordinated government policies and complementary humanitarian interventions,” the Office of the UN High Commissioner for Refugees (UNHCR) said in a statement today.

“The diversity of those on the move, including the young and the old, single men and women as well as families, victims of trafficking and gender based violence, and people from different nationalities and backgrounds means that individuals face different immediate needs based upon their specific vulnerabilities. This poses a further challenge to already overstretched authorities.”

About half the funds will be allocated for Greece, which has borne the brunt of an influx that saw more than 1 million refugees and migrants pour into Europe across the Mediterranean last year, half a million of them Syrians escaping war in their country, with Afghans accounting for 20 per cent and Iraqis for seven per cent.

UNHCR was joined in the appeal by the International Organization for Migration (IOM) and some 65 other organizations.

Humanitarian operations in 2016 will provide aid and protection activities where people are arriving, including identifying those at heightened risk, UNHCR spokesperson Adrian Edwards told a news briefing in Geneva.

They will also include registration, shelter, water and sanitation, and bolstering capacities for front-line responders such as coast guard, border guards, police, as well as support for affected communities. Help with relocation and resettlement are also covered by the appeal.

With global forced displacement at a record high of some 60 million people and increasingly impacting countries of the Global North, around 850,000 of the more than 1 million refugees and migrants who poured into Europe in 2015 crossed from Turkey to Greece by boat, with at least 3,735 more believed drowned. A smaller number crossed from North Africa to Italy.

Most of those who arrived in Greece continued through the Balkans towards Austria, Germany, Sweden and other countries. 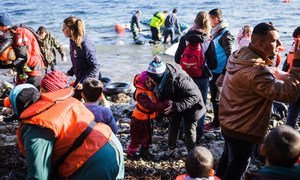 Refugees and migrants fleeing to Europe by sea this year have passed one million, according to figures just released by the UN refugee agency, many on perilous trips aboard inadequate vessels run by people smugglers, with at least 3,735 more believed drowned.