With Mali at turning point, commitment to lasting peace and development a ‘must’ – senior UN relief official

OCHA/A. Desgroseilliers
Regional Humanitarian Coordinator for the Sahel, Toby Lanzer, plays with a child at a Gao malnutrition treatment center in Mali.
25 January 2016

Wrapping up visit to Mal, the United Nations Regional Humanitarian Coordinator for the Sahel, Toby Lanzer, said that he had seen both progress and challenges on security and access to basic services for crisis-affected communities, while underscoring the importance of full commitment – from national authorities and the international community – to move the country forward.

“Mali is at a turning point in its history and the authorities must remain fully committed to seizing this opportunity. At the same time, the international community must maintain and scale up its support to enable people to realize their expectation for peace, justice and development,” said Mr. Lanzer in a press statement from the capital, Bamako, at the end of his 18-22 January visit to the country.

“Important progress has been made; schools have reopened and access to safe water and essential healthcare has improved,” he continued, adding that sustained “redeployment of State authorities is essential if we are to consolidate existing gains and strengthen the much needed recovery and resilience work with the support of humanitarian and development partners.”

In the North of the country and in Bamako, Mr. Lanzer met with members of the Government, local authorities, civil society organizations and humanitarian partners. He also visited Gao and Kidal to meet people affected by the crisis and visit aid projects.

“The youth, women and community leaders I met all have a vision for the future of their society; and they want to be part of its shaping,” stressed Mr. Lanzer.

While noting that progress was less significant in areas of persisting insecurity, which yielded hampered aid, vulnerability and precarious conditions, the UN Humanitarian Coordinator saw significant improvement resulting from relief work and the return of some administration personnel.

Mr. Lanzer’s mission took place just after the Humanitarian Coordinator for Mali, Ms. Mbaranga Gasarabwe, assessed the needs and challenges on the ground in northern Mali – encompassing Timbuktu, Gao and Kidal – including within the context that the humanitarian actors were operating.

“The signature of the Peace Agreement and its implementation by all parties should allow for broader humanitarian access to meet people’s urgent needs, as well as working with authorities to strengthen communities’ self-reliance and autonomy,” said Ms. Gasarabwe.

Through concerted efforts, humanitarian actors in the country assisted more than a million-and-a-half people last year. Water distribution and electricity systems in the main urban centres were rehabilitated with the support of partners from the stabilization sector.

“During the coming months, expected improvements in the security situation will be essential to ensure populations’ access to basic services,” she added.

However, significant needs remained, such as access to water in rural areas and Kidal; maintenance of public health and livestock conditions; and support for the next planting season, to safeguard household food security.

The humanitarian response plan for Mali, which involves partnering UN and non-governmental agencies, called for $354 million this year and included a crucial component to build community resilience.

The country’s Government, with the support of UN agencies and programmes as well as the UN Multidimensional Integrated Stabilization Mission in Mali (MINUSMA), has been seeking to restore stability and rebuild following a series of setbacks since early 2012, including a military coup d'état, and renewed fighting between Government forces and Tuareg rebels. 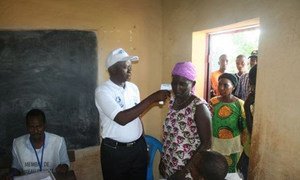 Welcoming positive political developments in West Africa, in particular the holding of peaceful elections in Nigeria, Togo, Burkina Faso, Guinea and Côte-d'Ivoire, members of the UN Security Council stressed the importance of the upcoming elections in Niger, Benin, Cabo Verde, Ghana and The Gambia to be “free, fair, peaceful, inclusive and credible.”