<a href=http://bit.ly/1PogbPu>Obinna Anyadike/IRIN</a>
A policeman in Kabul, Afghanistan, which remains the most dangerous country for aid workers globally.
21 January 2016

The UN Assistance Mission in Afghanistan (UNAMA) today condemned the suicide attack against media workers in Kabul yesterday that killed eight and injured 24 civilians, many of them from the media sector, as well as women and children.

The Taliban claimed responsibility for the blast that deliberately targeted a minibus transporting staff of the Tolo media organisation from work to their homes. In October the Taliban issued a specific threat against Tolo and other named Afghan news organisations, designating them as military objectives.

“Strong and independent journalism, free from intimidation and fear of criminal violence, is essential for a healthy democracy and decent society,” said Tadamichi Yamamoto, the Secretary-General’s Deputy Special Representative for Afghanistan and Acting-Head of UNAMA, in a statement.

“Afghanistan can be justly proud of its flourishing media sector. All steps must be taken to safeguard media professionals and freedom of expression against those who would use violence to impose their voice and views alone,” he added.

Underlining that journalists, as civilians, may never be the object of attack or threats, UNAMA called on all parties to the conflict, including the Taliban, to rescind any threats against the media.

The Mission also reiterated that international humanitarian law, which applies to all parties to the conflict in Afghanistan, prohibits attacks against civilians at any time and in any place. 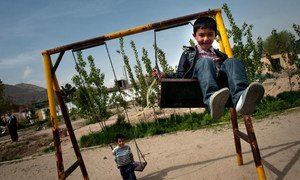 The United Nations Assistance Mission in Afghanistan (UNAMA) today condemned a spate of bombings in civilian areas of Kabul by the Taliban in the first few days of the New Year.