Global foreign direct investment (FDI) flows rose by 36 per cent in 2015, reaching their highest levels since the financial crisis, according to a report out today from the United Nations Conference on Trade and Development (UNCTAD), which pegged the increase to a wave of cross-border mergers and acquisitions.

The UN agency’s latest Global Investment Trends Monitor shows that foreign investment totalled some $1.7 trillion and the that increased FDI – investment made by a company or entity based in one country, into a company or entity based in another country – in developed countries was the main factor behind the unexpected spike, with industrialized nations accounting for 55 per cent of global FDI inflows last year.

Strong growth in flows was reported in the European Union (EU) as well as in the United States where FDI quadrupled, although from a historically low level in 2014.

According to the report, developing economies saw their FDI reaching a new high of $741 billion, five per cent higher than in 2014. Developing Asia, with its FDI flows surpassing half a trillion dollars, remained the largest FDI recipient region in the world, accounting for one third of global FDI flows.

The report explained that global FDI growth in 2015 was largely attributed to cross-border merger and acquisitions, which rose by 61 per cent last year. It goes on to note that only limited contributions from greenfield investment projects ¬– finances used to create a business or facility where none previously existed – in productive assets were recorded, with the total value of greenfield investment projects remaining much the same as in 2014.

Looking ahead, UNCTAD said that barring another wave of merger and acquisition deals and corporate reconfigurations, FDI flows are expected to decline in 2016, reflecting the fragility of the global economy, volatility of global financial markets, weak aggregate demand and a significant deceleration in some large emerging market economies.

Elevated geopolitical risks and regional tensions could further amplify these economic challenges, said the report, adding that stagnant greenfield investment globally and outright declines in a number of developing regions suggests that the current upswing in global FDI flows is potentially fragile and exposed to the vagaries of the cross border merger and acquisitions market.

♦ Receive daily updates directly in your inbox - Subscribe here to a topic.
♦ Download the UN News app for your iOS or Android devices.
investment 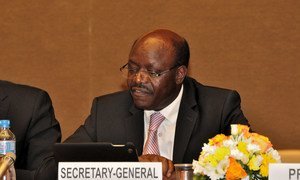