Reflecting the “considerable and continued progress” in consolidating peace and stability in Côte d’Ivoire, the Security Council today cut a further 1,500 troops from the United Nations peacekeeping Mission, which played a major role in halting violence in the country after disputed elections in 2010.

In a unanimously adopted resolution, the 15-Member body decreased the authorized ceiling of the UN Operation in Côte d'Ivoire (UNOCI) from 5,437 to 4,000 military personnel by 31 March.

UNOCI, set up in 2004 to facilitate implementation of a peace agreement after the West African country was torn apart by civil war, with an authorized ceiling of 6,240 uniformed personnel, helped restore legitimacy and stability in 2011, along with French forces, after incumbent President Laurent Gbagbo’s refusal to concede defeat in the 2010 elections to Alassane Ouattara.

At its height, the Mission maintained some 7,000 uniformed personnel on the ground, mandated to help protect civilians and support the efforts of the Ivorian authorities to address the root causes of the conflict and establish lasting peace, including security sector reform, and the disarmament and reintegration of armed factions.

Earlier this month, UN Secretary-General Ban Ki-moon’s Special Representative, UNOCI head Aïchatou Mindaoudou, told the Council that the October 2015 election of President Ouattara to a second term provided the country’s citizens with the opportunity to start a new chapter in their nation’s history and consolidate achievements towards long-term stability.

During the General Assembly General Debate in October, Côte d’Ivoire’s Permanent Representative Claude Bouah-Kamon praised the UN for its “irreplaceable” contribution to advancing peace, security and development over the 70 years of its existence.

“I wish to here reiterate the gratitude of the Ivoirian people for the invaluable role the United Nations played and continues to play at our sides,” he said. 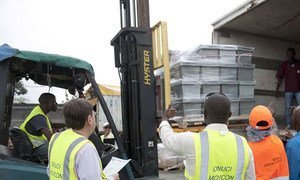 The top United Nations official in Côte d’Ivoire today highlighted that the peaceful conclusion of the presidential election provides the country’s citizens with the opportunity to turn the page, start a new chapter in their nation’s history and consolidate achievements towards long-term stability.