WFP/Bruno Djoye
Two and a half million people in the Central African Republic (CAR) are facing hunger.
20 January 2016

An emergency food security assessment by the United Nations World Food Programme (WFP) and its partners has revealed that half the population of the Central African Republic (CAR) – nearly 2.5 million people – faces hunger.

This marks a doubling in the number of hungry people in a one-year period, as conflict and insecurity have led to limited access to and availability of food.

“Three years of crisis have taken a huge toll on the people of CAR,” said Guy Adoua, WFP Deputy Country Director in the country, in a press release.

“Families have been forced so often to sell what they own, pull their kids out of school, even resort to begging, that they have reached the end of their rope. This is not the usual run-of-the-mill emergency. People are left with nothing,” he added.

According to the assessment, one in six women, men and children struggles with severe or extreme food insecurity, while more than one in three is moderately food insecure, not knowing where their next meal is coming from.

“WFP is extremely concerned by this alarming level of hunger. People not only lack enough food but are also forced to consume low-cost, low-nutrient food that does not meet their nutritional needs,” added Mr. Adoua.

The report shows that the 2014-2015 harvest was poor and that food prices remain high as farmers have not tended their fields due to insecurity, and hundreds of thousands have been forced to flee their homes and abandon their land and livelihoods.

Further clashes erupted in late September as much of the food security data for the assessment was being collected. That violence fuelled more displacement as people were slowly returning home. Nearly 1 million people are still displaced inside CAR or seeking refuge in neighbouring countries.

The report recommends continued emergency food assistance to displaced families and returnees; food and technical assistance to farmers to recover; creating safety nets through programmes such as the school meals programme; and providing support to rehabilitate the infrastructure through food-for-assets activities.

Meanwhile, WFP is providing emergency food and nutritional support to those most vulnerable and plays a crucial role in supporting recovery efforts. The agency’s programmes focused on cash-based transfers and local food purchases going into school meals for thousands of children boost the local economy and people’s livelihoods.

“We must help the most vulnerable, who need emergency food assistance to survive, yet we also need to focus on people across CAR so they can recover and rebuild,” stressed Mr. Adoua.

In December 2015, WFP provided food for nearly 400,000 people through general food distributions, cash-based transfers, nutrition support and school meals, as well as food-for-assets activities, but $41 million is required so that it can respond to urgent needs through to the end of June. To date, WFP’s operation is only 45 per cent funded. 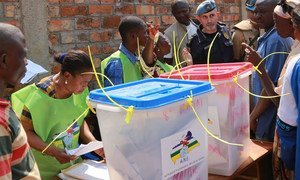 The United Nations Mission in the Central African Republic (MINUSCA) today reported that the final provisional results for the legislative elections have been announced by the Autorité Nationale des Elections (ANE), with 21 candidates, including three women, being elected by an absolute majority during the first round.