UN Photo/Jean-Marc Ferré
Special Rapporteur on the promotion and protection of the right to freedom of opinion and expression David Kaye.
19 January 2016
Human Rights

Regarding freed Washington Post reporter Jason Rezaian, the UN Special Rapporteur on freedom of opinion and expression, David Kaye, said in a press release that: “For the past year and a half, Mr. Rezaian’s unlawful detention had come to symbolize the Iranian Government’s widening crackdown on speech and press freedoms in the country.”

While welcoming his release, the UN expert underscored that Mr. Rezaian should not have been in prison in the first place since his prosecution was connected to his work as a journalist and freedom of expression.

“The Government of Iran should protect those who exercise their freedom of expression, instead of prosecuting them,” Mr. Kaye stressed. “Dozens of Iranian journalists, bloggers and social media activists remain behind bars in Iran simply for exercising their legitimate rights of expressing views,” he added.

Two other freed prisoners, Christian pastor Saeed Abedini – who was arrested in 2012 reportedly for activities related to home churches – and Amir Hekmati, were being prosecuted for espionage and other national security-related crimes in trials that fell short of international standards.

The UN Special Rapporteur on freedom of religion or belief, Heiner Bielefeldt, reminded Iran of its responsibility to ensure that no one is prosecuted or detained because of their religious views or activities, including Christians of Muslim backgrounds.

“While Iranian officials allowed pastor Abedini to board the plane and put this horrible ordeal behind him, they continue to hold dozens of Iranian Christians on vague and overly broad national security charges like ‘propaganda against the system.’ These detentions clearly violate not only Iran’s obligations under international law but their own constitution,” Mr. Bielefeldt noted.

Ahmed Shaheed, the UN Special Rapporteur on the situation of human rights in Iran, praised the lifting of Iranian sanctions, which coincided with the prisoners’ release, and made a special appeal to the Iranian authorities “to spare no effort in addressing long-standing human rights concerns repeatedly raised by the UN human rights mechanisms, especially the alarming surge in executions this past year, increasing restrictions on freedom of expression and peaceful assemblies, women’s rights, discrimination against religious and ethnic minorities, and the ongoing prosecution of journalists, lawyers and human rights defenders.”

Mr. Shaheed also renewed his call on Iran to engage constructively with his Human Rights Council mandate by allowing a visit to the country.

Special Rapporteurs, who are not UN staff and are independent from any government or organization, are appointed by and report to the Geneva-based UN Human Rights Council. 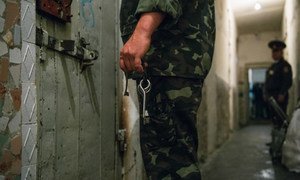