Senior United Nations officials today welcomed the nomination of the Government of National Accord in Libya by the Presidency Council as a significant step forward in the quest to end the country's political divisions and armed conflict.

“This marks an important step towards the implementation of the Libya Political Agreement and the resolution of the crisis in the country,” UN Secretary-General Ban Ki-moon said in a statement issued by his spokesperson.

“[Mr. Ban] looks forward to the endorsement of the new Government so that it can begin to address the many challenges facing the country,” said the statement adding that the UN chief commended the Presidency Council and all Libyan leaders who demonstrated their commitment “to place the national interest first” and to engage in dialogue to resolve their differences.

In his statement, the Secretary-General reiterated his call on all Libyans to support the implementation of the Libyan Political Agreement so that Libya can continue its democratic transition.

"This is a sterling opportunity for Libyans to come together to build their country,” Martin Kobler, the Special Representative of the Secretary-General and head of the United Nations Support Mission in Libya (UNSMIL) said in a separate statement.

“The formation of the Government of National Accord (GNA) is one important leap on the path to peace and stability in Libya, I congratulate the Libyan people. Hard work lies ahead,” he added.

The Special Representative also stressed the need to immediately move forward to the next step which is the endorsement of the GNA by the House Representatives.

"I call on the members of the [House] and its presidency to uphold the country's national interest above all other considerations and promptly convene to discuss and endorse the proposed cabinet,” Mr. Kobler said.

UNSMIL was established in 2011 by the UN Security Council at the request of the Libyan authorities following six months of armed conflict to support the country's new transitional authorities in their post-conflict efforts. 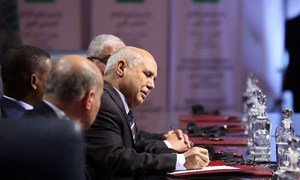 The United Nations in Libya has expressed regret over the decision of the country’s Presidency Council to postpone the formation of a national unity government for 48 hours beyond the deadline set by a UN-facilitated political agreement, emphasizing that all efforts to combat and eliminate these terrorist groups must be led by the Libyan State.