UNDP Guinea
Voting takes place in the first round of the presidential election in Guinea on 11 October 2015.
16 January 2016

Welcoming positive political developments in West Africa, in particular the holding of peaceful elections in Nigeria, Togo, Burkina Faso, Guinea and Côte-d'Ivoire, members of the UN Security Council stressed the importance of the upcoming elections in Niger, Benin, Cabo Verde, Ghana and The Gambia to be “free, fair, peaceful, inclusive and credible.”

In a statement issued following a briefing by the Special Representative of the Secretary-General for West Africa and Head of the UN Office for West Africa (UNOWA), Mohamed Ibn Chambas, members of the 15-member body expressed their concern that political tension may continue to erode governance in Guinea-Bissau and jeopardize achievements in the country since the 2014 elections.

“They called upon national leaders of Guinea-Bissau to work to sustain stability through substantive political dialogue in order to prevent escalation of tensions or relapse into conflict,” the statement indicated. “They also encouraged them to foster a climate conducive to national reconciliation, as well as democratic, social and economic reconstruction.”

Reiterating their strong condemnation of the recurrent terrorist attacks carried out in the region, in particular in Mali and the Sahel, as well as in the Lake Chad Basin region—notably by Boko Haram—members of the Security Council stressed the need to combat all forms of terrorism. In this regard, they expressed particular concern about the protection of civilians, the main targets of these attacks.

The Security Council also commended the efforts of the African Union and ECOWAS, as well as of Member States of the Sahel, to strengthen border security and regional cooperation, and said they remain committed to working closely with them and others to address cross-border security threats and prevent the spread of violent extremism and terrorism.

In addition, they expressed their concern about the trafficking of drugs and other illicit goods, as well as the smuggling of migrants and human trafficking, stressing the need to strengthen the fight against criminal activities in the sub-region.

Welcoming the success achieved in the fight against Ebola and reiterating their concerns about the humanitarian, social and economic consequences of this disease, the Security Council expressed its support and solidarity to affected countries and called for the strengthening of the early warning mechanisms and resilience of national health systems.

They also called upon the international community to sustain support to the affected countries and encouraged all the bilateral and multilateral partners to fulfill the commitments made during the Ebola recovery conferences held in Brussels, Washington and New York.

♦ Receive daily updates directly in your inbox - Subscribe here to a topic.
♦ Download the UN News app for your iOS or Android devices.
west africa|UNOWA 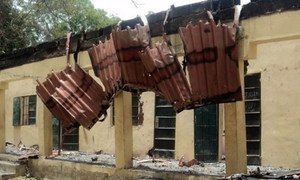 While peaceful and credible elections were held in several countries in West Africa in the past six months, violent extremism continues to pose a serious threat throughout the area, the top United Nations official for the region warned today.