Haiti: six years after quake, UN cites progress but warns of ‘deteriorating’ situation for those still in camps

UN/MINUSTAH/Logan Abassi
Six years after the devastating earthquake of 2010 that killed more than 200,000 people and left at least 1.5 million homeless, about 96 per cent of the displaced have left the camps under relocation programmes.
15 January 2016

Six years after the devastating earthquake that killed more than 200,000 people and left at least 1.5 million homeless, the United Nations is underlining that humanitarian action has achieved significant results, but that the situation has been deteriorating since June.

“Despite the progress achieved to date, there are still nearly 60,000 people living in IDP [internally displaced persons] camps in vulnerable situations and in need of humanitarian assistance and durable solutions,” said Enzo di Taranto, Head of the United Nations Office for the Coordination of Humanitarian Affairs (OCHA) in Haiti.

Thanks to relocation programmes, about 96 per cent of the 1.5 million displaced people have left camps. Other humanitarian challenges tackled include the fight against food insecurity and cholera. Until late 2014, the severe food insecurity decreased considerably, and the number of suspected cholera cases reduced, from 352,033 in 2011 to 27,800 in 2014. In addition, national capacities for emergency preparedness and response have been strengthened.

However, OCHA is alerting that since June 2015, it has noticed a deterioration of the humanitarian situation. There has been a resurgence in the number of cholera cases – over 33,000 in 2015 – challenging certain gains obtained in 2014. Also, due to the drought and the effects of El Niño, food insecurity has increased, affecting about 3 million Haitians.

Meanwhile, the vulnerability to disasters and migration issues between Haiti and the Dominican Republic has also contributed to the degradation of the humanitarian context. More than 55,000 people, identified by the International Organization for Migration (IOM) and the border network partners, were deported or have entered Haiti in different ways. The UN says this number constitutes only a part of the populations deported or returned from the Dominican Republic to Haiti since June 2015.

These humanitarian dynamics come at a time when funding for humanitarian action has decreased significantly, which OCHA said is endangering the important progress made to date and leading to a gradual withdrawal of humanitarian actors.

“Haiti cannot afford to become a forgotten crisis,” added Mr. di Taranto. “Therefore, we call for a sustained commitment to ensure that urgent humanitarian needs are addressed while sustainable actions continue. In 2015, OCHA mobilized about $13 million as part of the Central Emergency Responses Funds (CERF) and Emergency Relief and Response Funds (ERRF). However, this is not enough to address the urgent needs of the Haitian population in 2016.”

Due to the deterioration of the living conditions of IDPs, OCHA is encouraging the humanitarian community, civil society and the private sector to support the efforts to improve access to safe water, sanitation and medical treatment to displaced families, while waiting for the definitive closure of the camps. 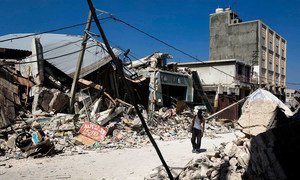 As the United Nations prepares to mark the sixth anniversary of the devastating earthquake in Haiti and pay tribute to the more than 200,000 victims who perished, including 102 UN personnel, Secretary-General Ban Ki-moon today called on the international community to “stand with Haiti” as it moves forward to rebuild.