UNICEF/Sebastian Rich
In the Gire 1 camp for internally displaced people, near Yola, Nigeria, a father holds photographs of his eldest daughter, 18, and his 6-year-old son, both of whom were kidnapped by members of Boko Haram during an attack on the family’s village.
15 January 2016

Violent extremism is a direct assault on the United Nations Charter and a grave threat to international peace and security, Secretary-General Ban Ki-moon said today while presenting a new plan of action to prevent violence stemming from “poisonous ideologies.”

“We are all appalled by the barbaric crimes that groups such as Da’esh, Boko Haram and others are committing against humanity,” Mr. Ban told Member States of the UN General Assembly, noting that the threat of violent extremism is not limited to any one religion, nationality or ethnic group, but that the vast majority of victims worldwide are Muslims.

Extremists has “brazenly kidnapped” young girls, systematically denied women’s rights, destroyed cultural institutions, warped the peaceful values of religions, and brutally murdered thousands of innocents around the world. “[They] have become a magnet for foreign terrorist fighters, who are easy prey to simplistic appeals and siren songs,” explained the UN chief.

“Addressing this challenge goes to the heart of the United Nations,” he continued. “It requires a unified response. And it compels us to act in a way that solves – rather than multiplies – the problem.”

Calling for a “cool-headed and common sense” approach, Mr. Ban underscored: “We must never be ruled by fear – or provoked by those who strive to exploit it. Countering violent extremism should not be counter-productive.”

In his new strategy – called the Plan of Action to Prevent Violent Extremism – the Secretary-General calls for a comprehensive approach encompassing not only essential security-based counter-terrorism measures but also systematic preventive steps to address the underlying conditions that drive individuals to radicalize and join violent extremist groups.

It appeals for concerted action by the international community, and provides more than 70 recommendations to Member States and the United Nations System to prevent the further spread of violent extremism. The recommendations are based on five inter-related points: putting prevention first; principled leadership and effective institutions; joint promotion of prevention and human rights; “all of Government approach”; and UN engagement.

“We also know the critical elements for success,” Mr. Ban said, before listing them. “Good governance; the rule of law; political participation; quality education and decent jobs; full respect for human rights.”The Plan is accompanied by a letter from the Secretary-General to the President of the General Assembly, where he puts forward an “All-of-UN” approach both at Headquarters and in the field to support national, regional and global efforts to prevent violent extremism, and assist Member States in developing National Plans of Action.

“We must also engage all of society – religious leaders, women leaders, leaders in the arts, music and sports,” he added.

Developed through an extensive UN inter-agency process and based on the outcomes of high-level meetings of the General Assembly and Security Council, the Secretary-General described it as an “urgent call to unity and action.”

Meanwhile, in his remarks, the President of the General Assembly said confronting and preventing violent extremism is fundamental to protecting our societies and populations.

“But to be truly effective, our approach to prevention must stay faithful to our common humanity and to our aspirations to secure peace and security, sustainable development, rule of law and respect for human rights,” stressed Mogens Lykketoft, commending the Secretary-General for taking this “important initiative.”

“It is a timely one, particularly given that the General Assembly will review the Global Counter-Terrorism Strategy later this year,” he added.

Mr. Lykketoft also noted that following today’s briefing, he will consult further with Member states on “how best to respond to this call, how to maintain momentum and move this matter forward in a speedy manner.” 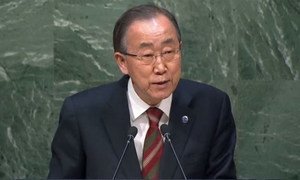 UN must get ‘priorities right’ in 2016, Ban tells Member States, calling for ‘more and better work’

Sharing his thoughts on the direction of the United Nations’ work in 2016, Secretary-General Ban Ki-moon today said the global community begins the year needing to get its “priorities right,” while underlining that more and better work needs to be done.