Ban condemns attacks in Jakarta; says ‘absolutely no justification’ for such acts of terrorism

United Nations Secretary-General Ban Ki-moon condemned the bombings and gun attacks today in the Indonesian capital, Jakarta, and reaffirmed that “there is absolutely no justification” for such acts of terrorism.

“[The Secretary-General] extends his condolences to the families of the victims and wishes those injured a speedy recovery,” said a statement issued by his spokesperson, in which the UN chief expressed his solidarity with the Government and people of Indonesia.

According to news reports, the attacks took place at a busy commercial thoroughfare in the city, leaving at least two people dead and wounding perhaps more than two dozen others.

Mr. Ban in his statement reaffirmed that there is absolutely no justification for such acts of terrorism, and he expressed the hope that the perpetrators of today's attacks “will be swiftly brought to justice.” 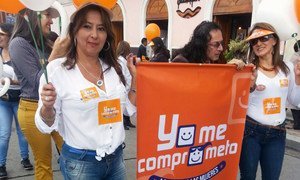 The “breakthrough” agreement signed this week by the Colombian Government and the Revolutionary Armed Forces of Colombia-People’s Army (FARC-EP) on victims of the decades-long conflict also acknowledges the various forms of violence that women have suffered and removes amnesties for the most serious crimes such as sexual violence, two senior United Nations officials said today.