The Democratic Republic of Congo (DRC) faces “very real risks of unrest and violence” over elections later this year while confronting a “significant deterioration” of security in its war-torn eastern provinces, the top United Nations official in the country warned today.

“Presidential and legislative elections scheduled for November of this year are a deeply divisive issue, particularly given the continued absence of an agreed electoral calendar or a budget for the elections,” Secretary-General Ban Ki-moon’s Special representative for DRC Maman S. Sidikou told the Security Council.

Addressing the Council by video conference from the DRC, he noted that formal preparations for a National Dialogue announced by President Joseph Kabila to forge consensus on the process have not yet begun, in part due to strong opposition by many major opposition groups.

“In the absence of agreement on the electoral process, political polarization has heightened tensions and contributed to an atmosphere of increased harassment and human rights violations,” he said, with the UN Organization Stabilization Mission in DRC (MONUSCO) registering over 260 election-related human rights violations, mostly against opposition members, civil society and journalists since last year.

“This, combined with a rising number of human rights abuses by armed groups in eastern DRC, demonstrates a worrying trend of narrowing political space and a real challenge to the conduct of peaceful credible elections,” he added.

“Given the very real risks of civil unrest and violence related to the electoral process, it is critical that all efforts be made to rebuild confidence among the stakeholders to find a way forward,” he said.

On a positive note on another longstanding human rights concern, Mr. Sidikou highlighted significant steps by the Congolese authorities, including 20 trials in the past three months which found 19 army officers guilty of rape.

Turning to the security situation, where “there has been a significant deterioration in the eastern part of the country in recent weeks,” Mr. Sidikou cited the Beni and Lubero areas of North Kivu Province where the Allied Defence Forces (ADF) and the Force Democratiques pour la Liberation de Rwanda (FDLR) pose ongoing and serious threats to the civilian populations.

In Beni, despite two years of operations against it, the ADF remains able to coordinate simultaneous attacks on the army and MONUSCO, with over 500 civilians killed since 2014, and tens of thousands of others displaced.

MONUSCO has responded with aerial operations and taken immediate steps to strengthen the protection of civilians through increased joint police and military patrols and redeploying additional troops of its Intervention Brigade.

In Lubero, civilians have been caught up in fighting between the Mayi Mayi group and the FDLR, being displaced, forcibly abducted, or targeted for massacres or harassment, often on the basis of ethnicity and perceived collaboration with the FDLR.

“The situation appears to be worsening in Lubero, potentially into openly inter-ethnic conflict between the Hum and Nande communities,” Mr. Sidikou warned. This dynamic could easily spark violence in adjoining territories where competition over land and customary authority has already heightened tensions.

“Reports of increased recruitment into ethnically-based self-defence groups are a worrying sign, and the upcoming elections period could further politicize and instrumentalize the groups on the ground,” he noted.

Referring to the proposed reduction of MONUSCO’s force by 1,700 troops, Mr. Sidikou said the drawdown will be accompanied by a “force transformation” to ensure that it will exercise greater operational capability to protect civilians through rapid deployment mechanisms and aerial reconnaissance.

The Mission, currently with nearly 20,000 uniformed personnel on the ground, is mandated to use all necessary means to protect civilians, humanitarian personnel and human rights defenders under imminent threat of physical violence and to support the Government in its stabilization and peace consolidation efforts. 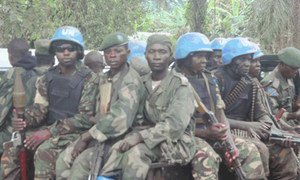 DR Congo: Ban condemns attack on UN base, calls for perpetrators to be brought to justice

Secretary-General Ban Ki-moon today called for swift action to bring to justice the perpetrators of a deadly attack yesterday against the United Nations peacekeeping mission in the Democratic Republic of the Congo (DRC), pledging continued support in the battle against rebel forces.