UN Photo/Martine Perret
A child who lost members of his family to the Ebola virus plays at the Alliance for International Medical Action (ALIMA) Child Care Centre in Nzérékoré, Guinea.
14 January 2016

The United Nations World Health Organization (WHO) today declared the end of the most recent outbreak of Ebola virus disease in Liberia, announcing that all known chains of transmission have been stopped in West Africa, but the job is not yet over.

With more flare-ups expected, WHO underlined that strong surveillance and response systems will be critical in the months to come to prevent additional cases. Since March 2014, the Ebola epidemic has claimed the lives of more than 11,300 people and infected over 28,500.

“WHO commends Liberia’s government and people on their effective response to this recent re-emergence of Ebola,” said Dr Alex Gasasira, WHO Representative in Liberia, in a news release.

“The rapid cessation of the flare-up is a concrete demonstration of the government’s strengthened capacity to manage disease outbreaks,” he continued. “WHO will continue to support Liberia in its effort to prevent, detect and respond to suspected cases.”

Liberia was first declared free of Ebola transmission last May, but the virus was re-introduced twice since then, with the latest flare-up in November. Today’s announcement comes 42 days – two 21-day incubation cycles of the virus – after the last confirmed patient in Liberia tested negative for the disease twice.

This date marks the first time since the start of the epidemic two years ago that all three of the hardest-hit countries – Guinea, Liberia and Sierra Leone – have reported zero cases for at least 42 days. Sierra Leone was declared free of Ebola transmission last 7 November and Guinea on 29 December.

“Detecting and breaking every chain of transmission has been a monumental achievement,” said Dr Margaret Chan, WHO Director-General. “So much was needed and so much was accomplished by national authorities, heroic health workers, civil society, local and international organizations and generous partners. But our work is not done and vigilance is necessary to prevent new outbreaks.”

The health agency has cautioned that the three countries remain at high risk of additional small outbreaks of Ebola, like the most recent one in Liberia. To date, 10 such flare-ups have been identified that were not part of the original outbreak, and are likely the result of the virus persisting in survivors even after recovery. Evidence shows that the virus disappears relatively quickly from survivors, but can remain in the semen of a small number of male survivors for as long as one year, and in rare instances, be transmitted to intimate partners.

“We are now at a critical period in the Ebola epidemic as we move from managing cases and patients to managing the residual risk of new infections,” said Dr Bruce Aylward, WHO’s Special Representative for the Ebola Response.

“The risk of re-introduction of infection is diminishing as the virus gradually clears from the survivor population, but we still anticipate more flare-ups and must be prepared for them,” he added. “A massive effort is underway to ensure robust prevention, surveillance and response capacity across all three countries by the end of March.”

WHO and partners report they are working with the Governments of the West African countries to help ensure that survivors have access to medical and psychosocial care and screening, as well as counselling and education to help them reintegrate into family and community life, reduce stigma and minimize the risk of Ebola virus transmission.

Meanwhile, United Nations Secretary-General Ban Ki-moon welcomed WHO’s announcement, commending the national authorities of the affected countries for their leadership and determination, as well as the local communities, which he described as “instrumental in tackling this outbreak.”

“The Secretary-General notes that the three affected countries will need to maintain intensive surveillance in order to detect and respond to any new flare-ups of Ebola,” indicated a statement issued by his Spokesperson.

Calling upon the international community to continue supporting the affected countries in order to rapidly respond to any future flare-ups, the statement added that the UN will stand firm with the entire region, as they move ahead along the path towards social and economic recovery.

The World Bank Group President Jim Yong Kim also issued a statement on today’s news, underlining that “Ebola’s scars will not soon fade, especially for survivors and their families, and for the heroic health workers who cared for the infected.”

“It’s now time to heed the lessons of this epidemic,” Mr. Kim declared. “The world must prepare for future pandemics now.”

♦ Receive daily updates directly in your inbox - Subscribe here to a topic.
♦ Download the UN News app for your iOS or Android devices.
ebola|Liberia

‘Merciless,’ spread of Ebola in Liberia must be stopped in its tracks, Security Council told 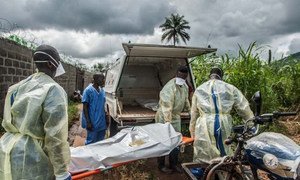 On the eve of West Africa being declared free of Ebola virus transmission, top United Nations officials today highlighted the “extraordinary” global cooperation mustered to tackle an epidemic that killed over 11,300 people, at the same time calling for vigilance against future flare-ups.