The top United Nations official in Côte d’Ivoire today highlighted that the peaceful conclusion of the presidential election provides the country’s citizens with the opportunity to turn the page, start a new chapter in their nation’s history and consolidate achievements towards long-term stability.

“Côte d’Ivoire was put to the test through the holding of the presidential election,” Aïchatou Mindaoudou, the Special Representative of the Secretary-General and head of the UN Operation in Côte d’Ivoire (UNOCI), told members of the Security Council during an update on the latest developments in the West African country.

On 25 October, the people of Côte d’Ivoire re-elected President Alassane Ouattara to a second term in office. Ms. Mindaoudou said the results were validated by the Constitutional Council “in an atmosphere of calm and order, in stark contrast to 2010.”

She noted that all observation missions – national, regional and international – concurred that the results of the vote reflected the will of the voters, and that the organization of the election was “transparent and credible.”

“Côte d’Ivoire is now the second largest economy in West Africa, a remarkable recovery since the post-election crisis of 2010/2011,” the head of UNOCI underlined. “National reconciliation, however, lags behind reconstruction and economic recovery. In this regard, I welcome President Ouattara's inauguration statement where he indicated his determination to make national reconciliation a priority of his second term,” she added.

Meanwhile, she said progress in the prosecution of alleged perpetrators of crimes committed during the post-election crisis remains slow, and urged the Government to expedite investigations and prosecute all those alleged to have committed atrocities regardless of political affiliation.

Ms. Mindaoudou also said she was encouraged by the participation of women in many public forum and seminars, whether representing their political parties or generally voicing their concerns on matters of national interest.

“It augurs well for an increased participation of women in future elections and ultimately in decision-making positions,” she insisted. “I note, in this regard, the President's intention to make women's empowerment a priority during his second term.”

Turning to security issues, she said the electoral process was a test for the Ivorian security forces, and that despite some short-comings, the national police, gendarmerie and armed forces met the challenge.

“The security situation in Côte d’Ivoire remains stable with violent crimes still on the downward trend since [the] last report,” Ms. Mindaoudou informed the Council. “During the electoral period, no serious security incidents were reported by the population, or the candidates. Armed robberies and banditry, however, continue to be a challenge, as well as threats of terrorist attacks.”

Regarding the border with Liberia, she reported that it remains closed as a precaution against the Ebola Virus Disease, but information-sharing between the UN Mission in Liberia (UNMIL) and UNOCI has continued. Humanitarian corridors were also opened on 18 and 22 December to allow for the voluntary repatriation of Ivorian refugees from Liberia, facilitated by the UN refugee agency.

Noting that the authorized strength of the UNOCI Force stands at 5,437 and that of the Police at 1,500, the head of the Mission said it is ready to further reduce the Force to 4,000 troops by 31 March. To this end, she said a strategic review team will deploy in February to develop recommendations on the further downsizing of UNOCI military and police, and the future of the mission.

“Challenges remain in Côte d’Ivoire notwithstanding the successful holding of the presidential election and the improving security situation on the ground,” concluded the UN Special Representative.

“Progress to advance national reconciliation, the strengthening of the security sector, […] and further improvements in the human rights situation and in transitional justice are all key challenges facing Côte d’Ivoire on the path to durable stability,” she explained.

Recalling that legislative elections are expected next December, Ms. Mindaoudou said these elections are “crucial,” and should involve the full political spectrum in Côte d’Ivoire, as it will be an opportunity for the opposition to participate and secure seats in the National Assembly, as per a “vibrant democracy.” 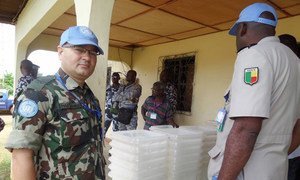 United Nations Secretary-General Ban Ki-moon is closely following developments in Côte d’Ivoire ahead of this weekend’s presidential elections and has welcomed the commitment of national stakeholders to participate in the process in a peaceful and transparent manner.