MINUSMA/Marco Dormino
MINUSMA peacekeepers on patrol in Ansongo, in the Gao Region of eastern Mali.
13 January 2016

Following a briefing on Monday on the situation in Mali by UN peacekeeping chief Hervé Ladsous, the Security Council has stressed that all parties signatory to June’s peace agreement bear the primary responsibility for achieving lasting peace in the country.

“The members of the Security Council welcomed in this regard the first positive steps taken to implement the Agreement on Peace and Reconciliation in Mali and urged the Government of Mali, the Plateforme and Coordination armed groups to continue to engage constructively with sustained political will and in good faith to fully and effectively implement the Agreement without further delay,” indicated a statement by the 15-member Council.

The country's Government, with the support of the UN Multidimensional Integrated Stabilization Mission in Mali (MINUSMA), has been seeking to restore stability and rebuild following a series of setbacks since early 2012, including a military coup d'état, and renewed fighting between Government forces and Tuareg rebels.

“The members of the Security Council urged the Government of Mali, the Plateforme and Coordination armed groups to prioritize the implementation of key provisions of the Agreement […] in order to bring concrete peace dividends to the populations,” the statement further noted.

It also urged them to take the necessary measures to advance the deployment of joint security patrols in the North and the cantonment, disarmament, demobilization and reintegration of armed combatants, as well as to advance the decentralization process.

Meanwhile, the members of the Security Council expressed their appreciation to Mongi Hamdi, the Special Representative and head of MINUSMA, for his “tireless efforts” in supporting the Malian peace process and his personal initiatives to defuse intercommunal tensions.

They similarly expressed their full support to the newly appointed head of Mission, Mahamat Saleh Annadif, who takes office tomorrow. In addition, they requested that he play a key role in overseeing the implementation of the Agreement, notably by heading the Secretariat of the Comité de suivi de l’Accord (CSA), the body dealing with the implementation process.

Encouraging the Government of Mali and MINUSMA to further strengthen their cooperation, the Council called on the members of the CSA and other relevant international partners to coordinate their efforts with the United Nations.

“The members of the Security Council expressed their concern about the security situation, including the expansion of terrorist and criminal activities into central and southern Mali,” underlined the statement. “They noted that the full implementation of the Agreement and the intensification of efforts to overcome asymmetric threats can help to contribute to improving the security situation across Mali.”

Finally, the members of the Security Council called on the UN Secretary-General and all MINUSMA troop- and police-contributing countries, as well as bilateral donors, to continue their efforts to ensure that MINUSMA contingents have the necessary equipment and training to fulfil their mandate. They stressed the importance of ensuring adequate protection of the Mission’s personnel, in the light of the evolution of security threats it faces, to effectively implement its mandate. 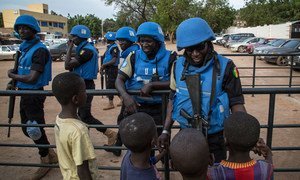 Despite considerable progress in Mali, the United Nations peacekeeping chief today warned that the peace process in the country remains fragile, and stressed the need to urgently defeat political, security and humanitarian challenges.