Despite considerable progress in Mali, the United Nations peacekeeping chief today warned that the peace process in the country remains fragile, and stressed the need to urgently defeat political, security and humanitarian challenges.

Last June, a peace agreement was signed by the Coordination of Movements of Azawad (CMA), following its signature in May by the Government and a third party, the Platform coalition of armed groups.

“Since the last consultations in October, […] efforts by Malian authorities, parties signatory to the agreement, international mediators and MINUSMA [the UN Multidimensional Integrated Stabilization Mission in Mali] have helped reinforce the dialogue between the Government and [the movements],” Hervé Ladsous, the UN Under-Secretary-General for Peacekeeping Operations, told the Security Council.

The country's Government has been seeking to restore stability and rebuild following a series of setbacks since early 2012, including a military coup d'état, and renewed fighting between Government forces and Tuareg rebels.

Mr. Ladsous noted that the Government has now initiated a series of confidence-building measures, such as the liberation of some detainees and the organization of a meeting last September between President Ibrahim Boubacar Keïta and representatives from the Coordination and the Platform movements.

“Unfortunately, the fact that the monitoring bodies are functional did not fully translate into tangible progress toward the implementation of the agreement over the reporting period,” Mr. Ladsous informed the 15-member Council. “The process has continued to encounter important delays over the past few months.”

He warned that these delays bear the potential to unravel the “hard won” confidence built so far between the signatory parties, as illustrated by recent concerns expressed by the movements.

“In addition, it is important for the parties to prepare in earnest the local elections that were postponed in October last year, and to proceed with revising the electoral law as provided for in the agreement,” the peacekeeping chief added.

Highlighting that one lesson from the past six months is that the various pillars in the peace agreement are “strongly interrelated,” Mr. Ladsous said their implementation needs to take place in a “parallel and synchronized” manner.

“As we all know, there will be no lasting peace in northern Mali without peace dividends for the most vulnerable,” he stressed. “I welcome in that regard the continued engagement of international partners who pledged over 3.2 billion euros during the international conference for the economic recovery and development of Mali held in Paris last October,” he said.

According to the UN official’s report, progress has already been made, notably in the field of education, thanks to the concerted efforts of the Malian Government and humanitarian actors, including for the symbolic reopening of the schools that same month. In the three northern regions, 89 per cent of the schools that were operating before the crisis are currently functional.

Yet, one in five schools remains closed in areas affected by insecurity, mainly due to the absence of teachers. Access to a quality education for about 400,000 children continues to be hampered by a lack of qualified teachers, infrastructure and school materials.

“Since June, MINUSMA has scaled up its support for communities in the North by 30 per cent, supporting 36 new quick-impact projects for approximately USD 1.3 million,” Mr. Ladsous underlined.

New projects reportedly include the provision of potable water in Kidal region, equipment for health centres in Kidal and Mopti, the refurbishment of social care centres in Gao and social reintegration projects for women, youth and internally displaced persons in Gao, Kidal, Mopti and Timbuktu regions.

“But much more remains to be done to meet the needs of the people. We hope the Government and the movements will soon finalize the development strategy for the north in accordance with the peace agreement and the commitment made in Paris,” he added.

Finally, Mr. Ladsous said the last months have shown the extremist groups’ determination for the peace process to fail; he reported that armed groups who are parties to the agreement have been targeted as well as MINUSMA personnel and infrastructure. 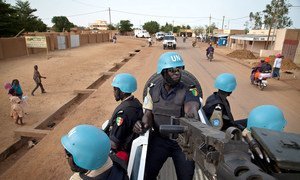 The United Nations has strongly condemned a mortar attack on a UN camp in restive northern Mali earlier today, which left two peacekeepers and a civilian contractor dead, and 20 others injured, with the Security Council calling on the Malian Government to swiftly investigate the incident and bring the perpetrators to justice.