Marking the 70th anniversary of the first meeting of the United Nations General Assembly Secretary-General Ban Ki-moon today said the body has truly become the “Parliament for all people.”

“The resolutions adopted by the General Assembly may not all be acted on right away. Yet they stand as our common position on the most pressing issues of our times,” Mr. Ban told UN officials and delegates attending the commemoration.

“These resolutions tell the story of our resolve. They reflect our conviction that the countries of the world coming together can do far more collectively than they ever could alone. Each delegate who speaks, each vote that is cast, every gavel that opens a new meeting adds a little more hope to the world,” said the Secretary-General.

Seventy years ago on 10 January 1946, 51 nations came together at Westminster Central Hall in London, England, and called to order the first meeting of the UN General Assembly. Among the many people who participated in that meeting was Sir Brian Urquhart, a British Government official who went on to serve the United Nations over four decades. He was among the participants in today’s events.

“Sir Brian did more than live history,” the UN chief stressed. “He shaped history. And he recorded that history as a brilliant writer and journalist. We are privileged to have him here today.”

Emphasizing that the General Assembly is more important than ever, the Secretary-General called on the international community to “follow the example of giants like Sir Brian Urquhart – by saving more lives, advancing more progress and promoting ever greater respect for human rights in our world.”

The President of the 193-Member body’s current session, who himself turned 70 on Saturday, began his address by highlighting several features from the first ever meeting, such as it lasting just over one hour with only one decision taken – whom to elect as its first President.

“Interestingly, but not surprisingly, not one of the Permanent Representatives (PR) that day were female – a matter which remains a concern today where only 18 per cent of PRs are female,” stressed Mogens Lykketoft.

“These features and imbalances aside, the first meeting of the General Assembly was without any doubt the beginning of something special,” he added. “It was a major step forward by what is now commonly referred to as the international community.”

Mr. Lykketoft underlined that following a “horrific period” of war, destruction, genocide and nuclear bombings, nations of the world deliberately decided to come together.

“They decided to choose the only genuine path to achieve global peace, security, justice, human rights and social advancement,” he declared. “And in the General Assembly, they created the one true space in which ‘We the peoples’ – voices both big and small – would be heard.”

Mr. Lykketoft recalled that today, with 193 members representing 99.5 per cent of the world’s population, the General Assembly has become the “single most representative, deliberative body in the world.”

In their remarks, both Secretary-General Ban Ki-moon and President Lykketoft highlighted some of the most notable General Assembly achievements in the past year, including agreeing the Addis Ababa Action Agenda, the 2030 Agenda for Sustainable Development, and the Paris Agreement.

“We must also expand the spirit of cooperation of 2015 into every area of work of the General Assembly in 2016,” insisted the President of the 70 year-old Assembly. 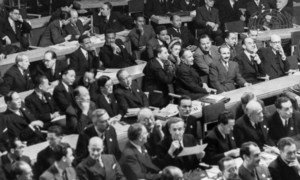 FEATURE: From misplaced emblem in London to iconic hall – the UN General Assembly across 70 years

Before there was a United Nations Secretary-General, a Security Council or an iconic Headquarters in New York, there was the General Assembly, the most representative body ever of world nations, meeting for the first time in a London hall facing Westminster Abbey, the 1,000-year-old coronation site of Britain’s kings and queens.