The United Nations Envoy for Syria, Staffan de Mistura, concluded today his regional consultations with meetings in Tehran, where he received assurances from his interlocutors that regional current tensions would not affect Iran's engagement in facilitating the holding of upcoming Geneva talks on ending the crisis in Syria.

The United Nations Special Envoy for Syria, Staffan de Mistura, concluded today his regional consultations with meetings in Tehran, where he received assurances from his interlocutors that regional current tensions would not affect Iran's engagement in facilitating the holding of upcoming Geneva talks on ending the crisis in Syria.

According to a note issued by the Spokesperson for UN Secretary-General Ban Ki-moon, Mr. de Mistura told a press conference in the Iranian capital that he had useful exchanges with Iranian Foreign Minister Mohammad Javad Zarif and Deputy Foreign Minister Hussein Amir-Abdollahian. Mr. de Mistura updated his interlocutors on preparations for the upcoming Geneva talks on Syria.

Like he had done when he visited Saudi Arabia on 5 January, he asked and obtained the assurance of his interlocutors that current tensions in the region would not affect the engagement of their Government in supporting the Vienna process and facilitating the holding of the Geneva talks.

“That is my main message […] in Riyadh I got that type of assurance, and that reassures me and the Secretary General. In Tehran, I got the same assurance that tensions, which are unfortunately ongoing, are going to affect neither the Vienna momentum nor the Geneva talks,” Mr. de Mistura told reporters.

The Special Envoy is now going to debrief the Secretary-General and seek his guidance in view of the beginning of the talks. He looks forward to the International Syria Support Group and the Security Council continuing to provide serious and consistent engagement, in order to ensure the beginning, on 25 January, of genuine political discussions aimed at resolving the Syrian crisis.

Mr. de Mistura's regional consultations follow the Security Council's adoption last month of its first resolution focused on the politics of ending Syria's five-year-long war. The measure gave the United Nations an enhanced role in shepherding the opposing sides to talks for a political transition, and endorsed a timetable for a ceasefire, a new constitution and elections, all under UN auspices.

According to the resolution, the upcoming Intra-Syrian talks will be held in line with the 2012 Geneva Communiqué and consistent with the 14 November 2015 statement of the International Syria Support Group (ISSG) on the issue. 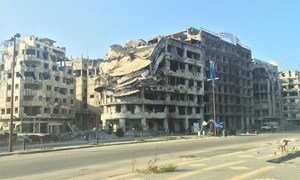 Continuing his regional consultations ahead of United Nations-facilitated talks on resolving the crisis in Syria, UN Special Envoy Staffan de Mistura had a useful meeting today in Damascus with the Minister of Foreign Affairs and Expatriates of the Syrian Arab Republic, Walid Mouallem.