“I deeply regret this decision by the Government,” said UN High Commissioner for Human Rights Zeid Ra'ad Al Hussein, in a press release.

“My team on the ground has, in my view, been performing well under extremely difficult circumstances,” he stated. “The Government's decision appears to be based on a number of misunderstandings, both of what my Office has been saying publicly, and of what the role of the UN is in a conflict situation. I fear it will hamper our work in the future and the statements of the Government could compromise the safety of the remaining national and international staff,” he added.

Underlining that the job of the UN Office of the High Commissioner for Human Rights (OHCHR) is not to highlight violations committed by one side and ignore those committed by the other, Mr. Zeid said that “to the best of our ability, in a very fluid and dangerous environment, we have tried to monitor and report objectively on the human rights situation in Yemen.”

“Unfortunately, both sides have very clearly committed violations, resulting in some 2,800 civilian deaths over the past nine months,” he reported. “Our role is to focus on human rights and the protection of civilians, not on the politics.”

“As the Secretary-General's spokesman

said last night, respect for human rights is absolutely essential for long-term peace and stability. By impeding the United Nations' human rights work, the Government is failing to uphold its obligations,” he insisted.

According to OHCHR, in public statements on Thursday, Yemen's Minister of Human Rights gave a variety of reasons for the Government's decision, including an assertion that the Office had not paid enough attention to the situation in Taiz, and that it issued press releases with “incomplete information.”

“Part of our job is to try to prevent further violations, and to do so, when security permits, UN human rights officials consistently and impartially engage with all sides to a conflict,” Mr. Zeid explained. “It is a mistake to view this as some sort of endorsement of an opposition movement's position at the expense of the Government. We have been operating within a mutually agreed framework,” he said.

The top UN human rights official said he is also perplexed by the accusation that OHCHR “has ignored the deplorable situation in Taiz, which has been suffering for many months from a blockade of supply routes by Popular Committees affiliated with the Houthis.”

“We have addressed the situation in Taiz in numerous public statements, including earlier this week at a press briefing in Geneva,” he stressed. “The fact that that briefing and other public statements have also focused on casualties caused by coalition forces, including through the apparent use of cluster submunitions, is a reflection of the unfortunate realities on the ground in Yemen, not a sign of bias.”

The High Commissioner noted that the expulsion of his representative is likely to complicate OHCHR's ability to implement a resolution adopted by the UN Human Rights Council in September which requested it to provide technical assistance and work with the Government of Yemen in the field of capacity-building and to identify additional areas of assistance to enable Yemen to fulfil its human rights obligations.

The resolution – which was supported by the Government– also specifically requested OHCHR to assist a national independent commission of inquiry in carrying out its work in accordance with international obligations, and the Office is planning to deploy a specially recruited three-person monitoring team within the coming weeks.

“The States who make up the Human Rights Council clearly believe my Office has an essential role to play in ensuring that Yemen's national independent commission of inquiry functions effectively and impartially,” Mr. Zeid continued. “Expelling the leader of my existing team in Yemen sends a very negative message indeed, just as we embark on a process that was designed to help Yemen carry out this important inquiry, the outcome of which will be very important for the Government's future credibility,” he said.

According to a note to the press issued today by the UN Spokesperson, the UN Special Envoy for Yemen, Ismail Ould Cheikh Ahmed, will be traveling to the capital Sana'a soon, after meeting with top Yemeni leaders in Saudi Arabia. 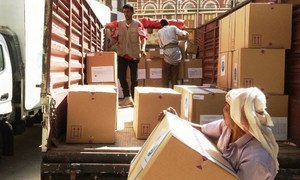