UNICEF/Jeoffrey Maitem
A mother carries her daughter as they evacuate from Typhoon Koppu-hit town of Laur, Philippines, on 19 October 2015. The ongoing El Niño pattern is likely to be one of the strongest since 1998 and will continue into early 2016.
7 January 2016

“We are here to re-sound the alarm; to spur a collective response to the humanitarian suffering caused by changes in weather patterns linked to El Niño and to take action now to mitigate its effects,” said Stephen O'Brien, the UN Under-Secretary-General for the Coordination of Humanitarian Affairs, who added: “If we act now, we will save lives and livelihoods and prevent an even more serious humanitarian emergency from taking hold.”

He said that in some regions, millions of people are already facing food insecurity caused by droughts related to El Niño. “In other parts of the world, we have a short window of opportunity now to prepare for what we know will happen within months. In both cases, we must act together and we must act quickly,” he stressed.

“The strength of the current El Niño has put our world into uncharted territory,” continued Mr. O'Brien, explaining that while the phenomenon is not caused by climate change, the fact that it is taking place in a changed climate means that its impacts are less predictable and could be more severe. While the current El Niño is expected to decline in strength in the first months of 2016, “this does not mean that the danger is past.”

El Nino and a possible subsequent La Niña event would continue to effect different parts of the world – at different times – with a mix of above or below average rainfall.

“The impacts, especially on food security, may last as long as two years,” he said, expressing particular concern about a number of countries spread across Central and South America, the Pacific region and East and southern Africa. And while countries in those regions are by no means the only ones that could be impacted by the phenomenon, the gap between projected needs and local government and humanitarian actors' capacity to respond “requires our urgent attention.”

He said that in Latin America and the Caribbean, Honduras, Guatemala, El Salvador and Haiti are particularly vulnerable. Indeed, below average rainfall from March to September 2015 had led to significant crop losses and triggered the need for food aid for millions of people.

“More than 4.2 million people in Central America, including 3.5 million in Honduras, Guatemala and El Salvador are affected by one of the most severe droughts in the region's history, which is likely to grow in intensity until March this year,” he explained, adding that in Haiti, some 3 million people – or 30 per cent of the population – are classified as food insecure, with some 800,000 severely food insecure and in need of urgent assistance.

Beyond those countries, the wider region is at risk of potentially devastating effects on the agricultural sector including floods, landslides and droughts, potentially leading to forest fires.

“In the Pacific region, Fiji, Vanuatu, Solomon Islands, Papua New Guinea; these are the ones at greatest risk, but as many as 13 countries could be affected,” said Mr. O'Brien, noting that drought conditions are already affecting some 3.5 million across the region and that in some countries, El Niño is increasing the likelihood of typhoons and cyclones. Serious food insecurity is also foreseen in Timor Leste by March, when harvests are expected to fail, affecting about 220,000 people.

Turning to East Africa, he said that poor rains had resulted in drought-like conditions in the northern parts of the region, mostly Ethiopia, Sudan, Djibouti and Eritrea, while other parts of East Africa had experienced a wetter than normal season. By early 2016, projections indicate that at least 22 million people will be food insecure across the region and between 2.7 million and 3.5 million people could be affected by floods.

“Ethiopia is the country most affected so far as it faces the worst drought in 30 years. Humanitarian needs more than tripled in the past year,” reported the UN relief chief, adding that some 10.2 million people are in need of emergency food assistance. And while the Government is taking on an “impressive” leadership role in confronting the crisis – including the allocation of some $290 million of its own resources for response efforts – the scale of the challenges demand more significant and timely support, as it could take possibly three to five months for donor support to reach those in need on the ground.

All these countries and regions need assistance now, to offset the impacts already being felt and to prepare “for what we know is to come,” said Mr. O'Brien, adding that: El Niño poses a critical test to the global humanitarian system in two fundament areas. First, it has tested the world's commitment to early action. “The warning signs are there. Are we prepared to act on them? Are we prepared to make the resources available now based on these firm clues, or do we wait […] for the facts of a massive crisis?” he asked.

Mr. O'Brien stressed that previous crises had shown that early action is critical to reduce vulnerability and the need for humanitarian assistance later on. While major contributions from donors and humanitarian agencies had provided “a good start,” much more was needed, particularly as many of the response plans in affected countries remain seriously underfunded. 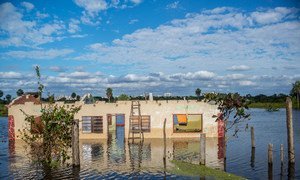 Extreme tornadoes in the United States over Christmas, abnormal snowfalls in Mexico, and heavy flooding in South America and the United Kingdom show that governments must take more preventive action to reduce human and economic losses from weather-related disasters, a senior United Nations official warned today.