UNICEF/Amer Al Shami
In December 2015, a mother loads preserved food supplies in a truck as the family prepares to move out of Nashabieh village to a neighbouring safer town within besieged East Ghouta, Syria. Almost 400,000 people are trapped in besieged locations.
7 January 2016

The United Nations is calling today for unimpeded humanitarian access to reach people in need in hard-to-reach and besieged areas of Syria, while welcoming the recent approval by the Government to access the towns of Madaya, Foah and Kefraya.

According to the UN Office for the Coordination of Humanitarian Affairs (OCHA), up to 4.5 million people in the war-torn country live in hard-to-reach areas, including nearly 400,000 in 15 besieged locations that do not have access to the life-saving aid they urgently need. In the last year, only 10 per cent of all requests for UN inter-agency convoys to these areas were approved and delivered.

A statement issued by the UN Humanitarian Coordinator in Syria, Yacoub El Hillo, and the Regional Humanitarian Coordinator for the Syria Crisis, Kevin Kennedy, underlined the particular concern about the plight of these hundreds of thousands of people besieged by parties to the conflict in locations such as Deir Ez-Zor city, Daraya, Foah and Kafraya, as well as besieged areas of East Ghouta.

Meanwhile, almost 42,000 people remaining in the town of Madaya are at risk of further hunger and starvation; the UN has received credible reports of people starving to death and being killed while trying to leave. According to OCHA, a 53 year-old man reportedly died of starvation last Tuesday while his family of five continues to suffer from severe malnutrition.

The statement further highlights the ongoing conflict continues to hamper the humanitarian response, and that freedom of movement is restricted by the presence of armed actors and landmines. Madaya last received a joint UN, Syrian Arab Red Crescent (SARC) and International Committee of the Red Cross (ICRC) convoy on 18 October, and some medical evacuations took place in December, but the town has been inaccessible since then despite numerous requests for access.

While the UN prepares to deliver humanitarian assistance in the coming days, it is recalling that international humanitarian law prohibits the targeting of civilians and their starvation as a tactic of war, and reiterates its call for immediate humanitarian access and for the facilitation of safe evacuation of civilians. 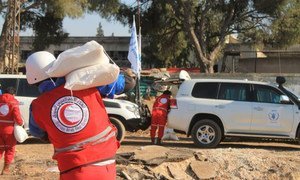 More than 460 people, including the seriously injured and their family members, were evacuated from four towns under siege in Syria today with the help of the United Nations and its Red Cross and Red Crescent partners following a local agreement between the fighters on the ground.