MINUSCA
Special Representative and head of the Multidimensional Integrated Stabilization Mission in the Central African Republic (MINUSCA) Parfait Onanga-Anyanga briefs the press after meeting with majority of presidential candidates following first round of elections.
6 January 2016

The United Nations Mission in the Central African Republic (CAR) reported today that the top UN official in the country has met with 28 of the 30 presidential candidates in the capital, Bangui, just days after the first round of presidential and legislative elections.

“[The Special Representative of the Secretary-General Parfait Onanga-Anyanga] stressed the need for the electoral process to continue,” UN Spokesperson Stéphane Dujarric told reporters at a press briefing in New York.

According to the UN integrated stabilization Mission, known as MINUSCA, the candidates “committed themselves to channelling election-related complaints through the Constitutional Court, as provided for in the Electoral Code as well as the Code of Good Conduct.”

As of yesterday, 98 per cent of the voting results of presidential elections and 96 per cent for the legislative elections were reportedly received at the Data Processing Centre in Bangui.

Regarding refugees’ vote, tally sheets were received from Cameroon, Chad, the Republic of Congo and Sudan. Meanwhile, final provisional results are expected to be announced in the coming days.

The UN has played a major role in seeking to restore peace in the Central African Republic, with military and police units from the 11,000-strong MINUSCA joining soldiers from the French Sangaris force and local security teams last 30 December at polling stations to ensure a peaceful vote.

After nine months of improved stability in CAR, a new wave of inter-communal violence erupted in September, killing at least 130 people, injuring 430 others, and triggering an 18 per cent increase in the number of internally displaced persons to 447,500. 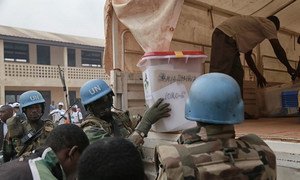 Yesterday’s presidential and legislative elections in the Central African Republic (CAR), a major step on the path to stability after two years of conflict between Muslims and Christians, were an “undeniable success” with a massive turnout, the top United Nations official there said today.