<a href=http://bit.ly/1n4kJCG>Tom Westcott/IRIN</a>
Two soldiers from forces operating under Libya’s Tripoli-based government walking through the deserted streets of Bin Jawad, near the important oil port of Sidra.
6 January 2016

The United Nations envoy in Libya, who last month has helped usher in a UN-brokered political agreement for a national government in the strife-torn country, has said an attack by the Islamic State of Iraq and the Levant (ISIL) on oil installations highlights the need for immediate implementation of the accord.

“Every wasted day in failure to implement the Libyan Political Agreement is a day of gain for Da’esh (an alternative name for ISIL),” Secretary-General Ban Ki-moon’s Special Representative Martin Kobler said of the attacks on Sidra and Ras Lanouf oil terminals.

“These oil resources are property of the Libyan people and future generations. Libyan parties must spare no effort to block any attempt by Daesh to finance its terrorist agenda through seizure of Libyan oil. This attack serves as a strong reminder to all Libyans of the need to immediately implement the Libyan Political Agreement and form the Government of National Accord.”

In December Mr. Kobler facilitated the final stages of the Agreement to form a Government of National Accord with a Presidency Council, Cabinet, House of Representatives and State Council, in talks between the sides in Morocco in a bid to end four years of factional fighting that has killed many Libyans and left nearly 2.4 million in desperate need of humanitarian aid.

Mr. Kobler, who is currently based in neighbouring Tunisia, began the New Year with visits to Libya as part of his efforts to broaden support for the Agreement.

Last month the UN Security Council called on the new Presidency Council to work within the 30 days prescribed by the Agreement to form a Government of National Accord, and finalize interim security arrangements needed to stabilize the North African country, which has been plagued by factional fighting since the 2011 revolution. 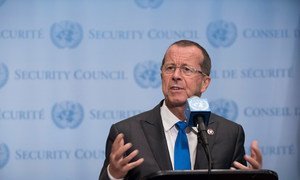 Strife-torn Libya begins 2016 with a ray of hope and the possibility of rediscovering peace in unity, the top United Nations envoy to the country has stressed in a New Year's Day message as he held talks with a cross-section of political leaders.