The United Nations is investigating new allegations of sexual exploitation and abuse and other misconduct by peacekeepers in the Central African Republic (CAR), this time by forces under the world body’s flag, the top UN official there said today, as further steps are being put in place to combat the scourge.

“The blue beret or the blue helmet you wear represents hope for the vulnerable population of the CAR," Secretary-General Ban Ki-moon’s Special Representative Parfait Onanga-Anyanga said, laying out new measures to help identify perpetrators and deter new cases, as well as renewing his commitment to protect whistle-blowers.

The allegations are the latest to have been made against UN peacekeeping missions in recent years.

Mr. Onanga-Anyanga met in Bangui, the capital, with the military and police components of the UN Multidimensional Integrated Stabilization Mission in CAR (MINUSCA), which he heads, stressing that there will be no complacency for perpetrators or accomplices of such crimes which tarnish the UN flag, the peacekeepers’ identity and their country’s honour.

Today’s meeting follows Mr. Ban’s pledge last month to urgently review recommendations of an independent panel which found that the UN did not act with the “speed, care or sensitivity required,” when it uncovered information about crimes committed against children by soldiers who were not under UN command.

In the spring of 2014, allegations came to light that international troops serving as peacekeepers had sexually abused a number of young children in exchange for food or money. The alleged perpetrators were largely from a French military force known as Sangaris, which was operating under authorization of the Security Council but not under UN command.

Reaffirming his commitment to Mr. Ban’s policy of ‘zero tolerance,’ Mr. Onanga-Anyanga stressed that all international personnel and units will be held accountable to the highest standards of behaviour and conduct. “There is no place in UN peacekeeping for those who betray the trust of the people we are here to help,” he said.

He announced on-going discussions with the UN High Commissioner for Human Rights (OHCHR) to carry out joint actions as part of the reinforcement of MINUSCA's ability to combat sexual exploitation and abuse.

Other measures include the establishment of a Police-Force joint brigade to identify sexual exploitation and abuse perpetrators and deter the occurrence of new cases. He underlined the need to conduct patrols in internally displaced persons (IDP) camps in close collaboration with internal CAR security forces.

The Mission continues to investigate each and every allegation of misconduct, and a fact finding mission is currently underway.

The National Authorities have been informed in Bangui and the Troop Contributing Countries in question have been informed officially in New York. Mr. Onanga-Anyanga called on them to conduct their own national investigations immediately and the UN Office of Internal Oversight Services will also be involved as appropriate.

“The entire UN family is collaborating in addressing [sexual exploitation and abuse] in the broader context of upholding highest standard of conduct and discipline within the organization,” MINUSCA said in news release.

“Over the past week, UNICEF staff (UN Children’s Fund) from the office in Bangui have undertaken four visits to meet with four alleged minors victims. UNICEF is working with a local partner to help the girls receive medical care, and is assessing their psychosocial needs. The girls were also provided with clothes, shoes and hygiene kits,” it added.

The nearly 11,000-strong MINUSCA, set up in 2014 after fighting between the mainly Muslim Séléka and mainly Christian anti-Balaka groups erupted in early 2013, killing thousands of people and driving hundreds of thousands more from their homes, played a major role in providing security last month for the first round of presidential and legislative elections. 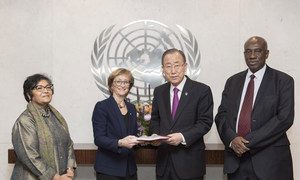 Secretary-General Ban Ki-moon today pledged to urgently review the recommendations made by an independent panel that found that the United Nations did not act with the “speed, care or sensitivity required,” when it uncovered information about crimes committed against children by soldiers – not under UN command – sent to the Central African Republic (CAR) to protect civilians.