UNICEF/Mohammed Hamoud
Boys hold a large piece of twisted metal near homes that were destroyed in an air strike, in Okash Village, near Sana’a, the capital of Yemen.
5 January 2016

Civilians are suffering a “terrible toll” in the fighting tearing Yemen apart, with casualties now topping 8,100, nearly 2,800 of them killed, amid Saudi-led coalition airstrikes, shelling by Houthi groups and other clashes, the United Nations reported today.

“Airstrikes have continued into the New Year, with around 11 strikes taking place in the capital Sana’a on Sunday and Monday (3 and 4 January), and further airstrikes are reported to have been carried out in the early hours of this morning,” UN High Commissioner for Human Rights (OHCHR) spokesperson Rupert Colville told the regular news briefing in Geneva.

He put civilian casualties recorded between 26 March and 31 December, 2015 at 8,119 people, 2,795 of them killed and 5,324 wounded, noting that at least 62 civilians were reported killed by airstrikes attributed to coalition forces in December, more than twice the number of November.

“We have also received alarming information on the alleged use of cluster bombs by coalition forces in Hajjah Governorate,” he added, reporting that an OHCHR team found remnants of 29 cluster submunitions near banana plantations in Al-Odair village in Haradh District.

“According to witnesses, several other villages in the same area have also been affected. Our team also documented the use of cluster submunitions in several other districts, including Hairan and Bakel Al-Meer, and interviewed two patients who had reportedly been wounded, in separate incidents, after stepping on unexploded submunitions.”

During December, at least 11 civilians were allegedly killed by shelling attributed to members of the Popular Committees affiliated with the Houthis, a significant decrease compared to 32 reportedly killed by them in November, Mr. Colville said.

The UN has been trying to broker an end to the fighting but these efforts have been stymied by violations of the ceasefire required to get the process under way. In December UN Special Envoy Ismail Ould Cheikh Ahmed adjourned peace talks until mid-January to allow for bi-lateral in-country and regional consultations to achieve a ceasefire.

Mr. Colville voiced particular concern at the situation in the central city of Taiz, scene of virtually uninterrupted violent clashes for more than eight months, where strict control of all entry points by Houthi-affiliated Popular Committees has limited access to essential items, including food, and made conditions extremely difficult for the civilian population.

The health situation in Taiz governorate has also continued to deteriorate, with Al-Rawdha Hospital, one of the largest still operating, forced to turn patients away.

The prison system has been heavily impacted, he added, with over 40 prisoners reportedly killed and 10 others injured by airstrikes or indiscriminate shelling. More than 4,300 prisoners have reportedly escaped from facilities across the country, including those in Sa’ada, Al Dhale’e and Aden, after they were hit by airstrikes or breached in armed clashes.

As most courts are no longer functioning, there have been delays in the review of detainees’ cases -- and, in some cases, in their release – and many detainees have been unable to receive visits from their lawyers and relatives. 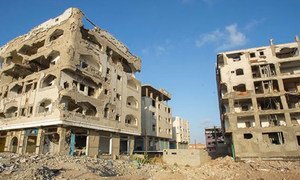 Yemen: UN agency appeals to all sides to allow food in for hundreds of thousands under siege

The United Nations World Food Programme (WFP) today appealed to all parties to the conflict in Yemen to allow food in for hundreds of thousands of hungry people under siege in the central city of Taiz, who have been deprived of supplies for many weeks.