Yemen: UN agency appeals to all sides to allow food in for hundreds of thousands under siege

WFP/Ammar Bamatraf
In many areas of Yemen, devastated by conflict, ongoing insecurity hampers WFP’s efforts to get food to the people in need.
31 December 2015

The United Nations World Food Programme (WFP) today appealed to all parties to the conflict in Yemen to allow food in for hundreds of thousands of hungry people under siege in the central city of Taiz, who have been deprived of supplies for many weeks.

“WFP has delivered food assistance to Taiz governorate in the hope of reaching every person in need, but so far we have not been able to reach most of them,” WFP Regional Director Muhannad Hadi said of the governorate, where over 3 million people, almost 400,000 of them internally displaced, are in dire need of some kind of humanitarian aid.

Taiz is one of 10 governorates, out of a total of 22, where food insecurity has reached ‘Emergency’ level, one step below famine on the five-point Integrated Food Security Phase Classification scale, in a country where factional fighting this year has killed or wounded thousands of people and displaced 2.5 million others.

Overall, 7.6 million Yemenis, more than a third of the total population, do not have enough food to lead a healthy life, have lost their livelihoods and face life-threatening rates of acute malnutrition, WFP stressed in a news release.

Last week, the UN Security Council voiced “deep concern about the dire humanitarian situation in Yemen, which continues to worsen,” stressing that more than 80 per cent of its 21 million people require some form of humanitarian aid.

“WFP appeals to all parties to the conflict to allow the safe passage of food to all civilians in need in all areas in Taiz,” Mr. Hadi said. “The precarious situation in Taiz has hampered WFP’s efforts to reach impoverished people, especially in besieged parts of the city, who have not had access to food for many weeks.

“WFP has delivered food assistance to Taiz governorate in the hope of reaching every person in need, but so far we have not been able to reach most of them.”

In the past month, WFP has dispatched to delivery points or warehouses in Taiz governorate 225 trucks loaded with 6,600 metric tons of food. Some food was delivered to Al Mudhafer, Al Qahira, Al Taizah and Salah districts where WFP aims to feed nearly 350,000 destitute people with wheat, pulses, vegetable oil and sugar.

Difficulty obtaining clearances from different parties, fighting and insecurity threaten the delivery to distribution points in many areas of the governorate, especially in Taiz city, WFP said.

Earlier this week, the UN World Health Organization (WHO) reported that it had delivered more than 100 tonnes of medicines and supplies for 1.2 million people in Taiz governorate, but had been unable to reach some 400,000 people in the city itself. 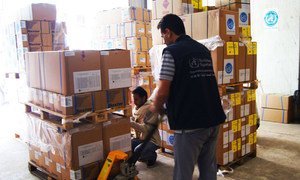 The United Nations health agency has delivered more than 100 tonnes of medicines and supplies for 1.2 million people in strife-torn Yemen’s central Taiz governorate, where over 3 million people, almost 400,000 of them internally displaced, are in dire need of humanitarian aid.