FAO
The impact of climate change is affecting Lesotho’s progress towards development in a number of areas, including agriculture, food security, water resources, public health and disaster risk management.
29 December 2015

People of African descent, often the poorest and most marginalized in society, are among those set to be most adversely affected by climate change, yet they barely figured in the recent Paris climate summit, a United Nations expert group warned today, calling for their full inclusion.

“Implementation of the Paris climate change agreement and future climate talks should focus on the needs and views of those most at risk, including people of African descent, and not be based on market forces,” the Chairperson of the UN Working Group of Experts on People of African Descent, Mireille Fanon Mendes-France, said in a statement in Geneva.

Despite advances in tackling racism and racial discrimination, both direct and indirect, people of African descent are often among the poorest and most marginalized groups in society, often living in communities disproportionately affected for decades by environmental degradation such as air pollution and toxic waste.

“They are now bearing, and are set to further bear, a disproportionately high burden of the consequences of climate change,” Ms. Mendes-France added.

“Given this, discussions on climate change must be framed in the light of environmental inequalities and take into account people of African descent and Africans living in all regions of the world, many of whom remain trapped in structural and institutional invisibility.”

“World leaders can make the Paris agreement process truly historic by ensuring that the participation of marginalized communities, including people of African descent, in efforts to deal with climate change is no longer overlooked or sidelined, but made central to the debate about the future of our common planet,” she concluded. 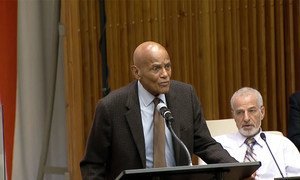 Debunking the myth of racial hierarchy, United Nations experts on racial discrimination today said that it is imperative to deconstruct, on a global scale, the ideological myth of a superior race and the resulting conviction of a superior culture.