<a href=http://bit.ly/1zchm1g>Desire Nimubona/IRIN</a>
People demonstrate in Bujumbura against a decision by Burundi’s ruling party to nominate President Pierre Nkurunziza to run for a third term (April 2015).
28 December 2015

A top United Nations official today called on all actors in Burundi to find a consensual solution to the crisis facing their country, which has been facing an upsurge in violence that has prompted fears of a relapse into the decades of civil war that killed tens of thousands of people.

“Burundi has gone through difficult times before and has a long history of dialogues. There are lessons to be learned from these past experiences,” Jamal Benomar, the Secretary-General’s Special Adviser, said at talks convened in Uganda by President Yoweri Museveni, who is also mediator of the East African Community.

“Burundians are the ones who will live with the consequences of the decisions they make. They have the prime responsibility for finding a way forward for the future of their country,” Mr. Benomar added.

“This must be a nationally-led and owned effort which we as the international community stand ready to support.”

Burundi has been in the midst of a political crisis since President Pierre Nkurunziza decided to run for a controversial third term earlier this year, since when at least 400 people have been killed, with the toll possibly considerably higher, and 220,000 have fled to neighbouring States with many others internally displaced.

Just over a week ago, the UN Security Council, voicing deep concern at the escalation of violence in Burundi, called for urgent acceleration of mediation efforts by East African States and urged all Burundian stakeholders to fully cooperate with a proposed African Union peacekeeping mission.

The Council stated that only a “genuine and inclusive” dialogue would best enable the Burundian stakeholders to find a consensual solution to the crisis, a point that Mr. Benomar reiterated today.

He added that the UN has a wealth of experience in supporting national dialogue processes and is ready “to support you in any possible way,” working in partnership with colleagues in the East African Community and the AU.

“I sincerely hope today’s event will mark the beginning of the path towards a peaceful, stable and prosperous Burundi.” 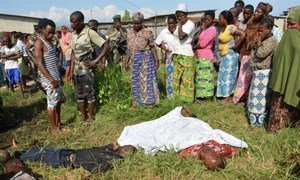