Secretary-General Ban Ki-moon applauded Member States on Wednesday night for adopting a budget of $5.4 billion for the United Nations to carry out its vital work during the 2016-2017 biennium.

“Your hard work, unwavering commitment and flexible cooperation have contributed to reaching that agreement,” Mr. Ban said, noting that delegates have worked through the night and reached agreement earlier than in past years.

“The budget you have approved reflects the difficult global financial reality we have faced for a number of years,” he told the 193-member General Assembly, which wrapped up its work for the main part of its seventieth session by taking action on a number of texts recommended by the Fifth Committee, which focuses on administrative and budgetary issues.

“Funding continues to shrink – while demands on the United Nations grow,” he noted. “Through it all, we are doing everything possible to fulfil the mandates you give us.

“Through it all, we are doing everything possible to fulfil the mandates you give us. We are guided by two pressing obligations: First, our duty to respond to the needs of the world’s people. And second: our responsibility to make the most of the resources you entrust to us. Through creativity, hard work and diligence, we are rising to the challenge.”

Mr. Ban went on to say that the Assembly has “wisely” decided to add resources to strengthen the very important pillar of development, commending its decision to support the follow-up and review of the world body’s efforts to reach the Sustainable Development Goals and carry out the financing for development agenda.

The Assembly also decided to reduce resources under Public Information and Common Support Services even more than the efficiencies he identified, the Secretary-General pointed out.

“This presents some challenges, especially at this critical juncture. We are carrying out the important initiatives the Assembly has approved, including Umoja, mobility and the development of the Global Service Delivery Model,” he said. “Nevertheless, we remain committed to exert our best efforts to deliver on these transformational initiatives and all other mandates you have given us.”

Mr. Ban also applauded the consensus decisions taken on the revised scale of assessments for Member States for sharing the costs of the regular budget and peacekeeping operations, which is reviewed every three years, as well as the approval of a mobility framework for UN staff.

“Today’s consensus action is a strong sign of our ability to work together,” he stated. “We need this spirit of global solidarity more than ever.”

The President of the General Assembly, Mogens Lykketoft, said he was very satisfied that the negotiations on the budget and other administrative items were concluded in such good spirit.

“With the adoption of the UN budget and the conclusion of the work of the Fifth Committee we come to the end of what has been a remarkable year for multilateralism,” he added. 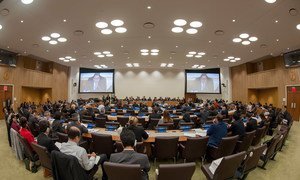 Introducing his proposed $5.5 billion budget for the work of the United Nations over the next two years, UN Secretary-General Ban Ki-moon said today that it encompasses the Organization’s “vision and commitment to budget discipline and strict financial management.”