The Security Council today expressed “deep concern” over the number of violations of Yemen’s cessation of hostilities agreement and urged all parties to adhere to the accord and exercise maximum restraint following the adjournment of peace talks until January 2016.

In a press statement, the 15-member body urged the Yemeni parties to fulfil commitments made during the talks held this month and welcomed their commitment to the new round of talks “building on the progress that has been achieved so far.”

The Council called on the “Yemeni parties to engage without preconditions and in good faith, including by resolving their differences through dialogue and consultations, rejecting acts of violence to achieve political goals, and refraining from provocation and all unilateral actions to undermine the political transition.”

Members also “strongly condemned all violence, attempts or threats to use violence to intimidate those participating in United Nations-brokered consultations and emphasized that such action is unacceptable.”

Earlier this week, UN Special Envoy for Yemen Ismail Ould Cheikh Ahmed, faced with numerous violations of the cessation of hostilities, adjourned the peace talks for a month until mid-January 2016 to allow for bi-lateral in-country and regional consultations to achieve a ceasefire.

Council members also “expressed deep concern about the dire humanitarian situation in Yemen, which continues to worsen.” They noted that more than 80 per cent of the population – 21 million people – require some form of humanitarian assistance and emphasised that the impact of the conflict has been devastating, particularly for children and the 2.5 million internally displaced persons.

The Council urged the international community to contribute to the humanitarian appeal for 2016, which has been only 52 per cent funded.

“They also stressed the urgent need for commercially-shipped food, medicine, fuel and other vital supplies to continue to enter Yemen through all of Yemen’s ports without delay as a humanitarian imperative because of the heavy dependence of Yemen and its people on imported food and fuel,” the statement said. 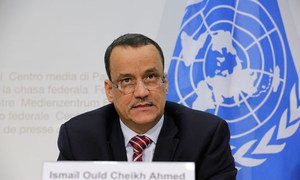