UNICEF/Alessio Romenzi
A young Syrian girl sits on a broken chair by her tent in Faida 3 camp, an informal tented settlement for Syria refugees in Bekaa Valley, Lebanon.
23 December 2015

Some 70 per cent of the over 1 million Syrian refugees in Lebanon now live below the Lebanese extreme poverty line, a big rise over 2014, and food insecurity is mounting, the United Nations reported today, calling for greater access to the domestic labour market to mitigate the crisis.

“Each day represents a monumental struggle to meet the most basic needs,” the 2015 UN Vulnerability Assessment of Syrian Refugees in Lebanon said, noting that the rise in those below the $3.84-per-day poverty line rise represented “a striking increase” from 49 per cent in 2014.

“We have reached a critical juncture. More than ever, refugees need our solidarity and support,” said UNHCR Representative in Lebanon Mireille Girard, whose agency compiled the report together with the UN World Food Programme (WFP) and the UN Children’s Fund (UNICEF).

“Without a robust and sustainable humanitarian response, refugees risk sinking deeper and deeper into poverty,” she added.

Noting that Syrian refugees now represent 25 per cent of Lebanon’s total population, the world’s highest number per inhabitant, the report underscored that restrictions on their access to the labour market imposed at the end of 2014 has reduced their livelihood opportunities and made it even harder for them to cover their basic needs autonomously.

“The main cause of food insecurity among Syrian refugees in Lebanon is lack of earning power,” it said. “Policies, measures and programmes oriented towards allowing refugees to generate income while protecting the Lebanese labour market and mitigating potential tensions with the host community are recommended.”

Dependency on food vouchers and loans as the primary livelihood source has also grown. The gap between monthly expenditures and income was estimated at $300 which households have to cover mainly by taking on debt.

Consumption of nutritious and healthy foods such as vitamin A rich fruit and vegetables fell and was replaced by higher consumption of fats and sugar. Infant and young child feeding practices continued to be inadequate for almost all children between 6 and 17 months old.

The report called for scaling up programmes to increase the coverage of basic needs including food for large numbers of refugees, particularly through winter.

“With the Syrian conflict now in its fifth year, the refugees face severe restrictions on accessing the Lebanese labour market, their assets and savings are increasingly exhausted, their debts are mounting and they must fulfil specific requirements to legalize their stay in Lebanon,” the report concluded.

“Each day represents a monumental struggle to meet the most basic needs. While the security situation means returning to their homes in Syria is out of the question, their dependency on assistance is growing in parallel with the reduction of available funds.

“Given the limited possibilities to move to other countries, refugees continue living in a stressful context with no way out. Lebanon and the refugees it is hosting are in a very delicate state: the situation requires special and immediate measures.”

♦ Receive daily updates directly in your inbox - Subscribe here to a topic.
♦ Download the UN News app for your iOS or Android devices.
syria|Lebanon

UN looks to next steps in Syria, including disarming militia in Lebanon, envoy says 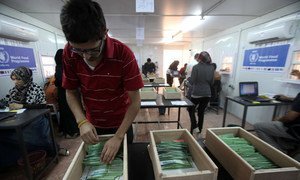 Extremely vulnerable Syrian refugees in Jordan and Lebanon will now receive higher-value electronic vouchers from the United Nations World Food Programme (WFP), with an average value of $21 per person per month, or 80 per cent of the full intended value of the vouchers.