UNICEF/Ashley Gilbertson VII
Refugees, primarily from the Syrian Arab Republic, Afghanistan, and Iraq, pass through the Vinojug reception centre for refugees and migrants in Gevgelija, former Yugoslav Republic of Macedonia, on the border with Greece.
22 December 2015

The number of refugees and migrants fleeing to Europe in 2015 has topped an unprecedented one million – at least 3,600 died or went missing in the crossings – the UN refugee agency (UNHCR) reported today, calling for much more to be done to receive and aid those uprooted by persecution, conflict and poverty.

“As anti-foreigner sentiments escalate in some quarters, it is important to recognize the positive contributions that refugees and migrants make to the societies in which they live and also honour core European values: protecting lives, upholding human rights and promoting tolerance and diversity,” said UN High Commissioner for Refugees António Guterres, whose agency compiled the latest figures together with the International Organization for Migration (IOM).

The number of people displaced by war and conflict is the highest seen in Western and Central Europe since the 1990s, when several conflicts broke out in the former Yugoslavia. One in every two of those crossing the Mediterranean this year – half a million people – were Syrians escaping war. Afghans accounted for 20 per cent and Iraqis for seven per cent.

According to UNHCR figures, as of 21 December, some 972,500 people had crossed the Mediterranean Sea, while IOM estimates that over 34,000 have crossed from Turkey into Bulgaria and Greece by land, for a total of more than 1,006,500.

Over 800,000 refugees and migrants came via the Aegean Sea from Turkey into Greece, accounting for 80 per cent of those arriving irregularly in Europe by sea, while the number of those crossing from North Africa into Italy dropped slightly, from 170,000 in 2014 to around 150,000 in 2015.

Over the year the number of people crossing the Mediterranean increased steadily from around 5,500 in January to a monthly peak in October of over 221,000.

After an initial chaotic reaction which resulted in tens of thousands of people moving from Greece through the Western Balkans and northwards, and finding themselves blocked at various borders, a more coordinated European response is beginning to take shape.

UNHCR launched an emergency response to complement European efforts, with over 600 emergency staff and resources deployed to 20 different locations to provide life-saving aid and protection, advocating for human rights and access to asylum, particularly for refugees with specific needs, such as unaccompanied children and women-headed households.

But much more needs to be done to reinforce required reception capacity at points of entry and allow for the humane and effective accommodation, aid, registration and screening to identify those in need of protection, those to be relocated to other countries within the European Union, and those who do not qualify for refugee protection for whom dignified return mechanisms have to be put in place. 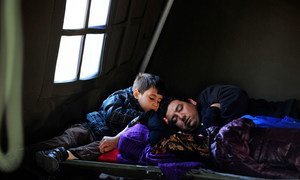 Global forced displacement for 2015 on track to break all records, topping 60 million – UN

Forced displacement this year is likely exceed all previous records, for the first time topping 60 million, meaning that one out of every 122 persons on Earth has been forced to flee their home, the United Nations refugee agency warned today.