UNICEF/UNI193691/Andrew Esiebo
Girls use their new school supplies during a class in an informal learning centre in a UNICEF-supported safe space for children in the Dalori camp for internally displaced people, in the north-eastern city of Maiduguri in Borno State.
22 December 2015

Violence and attacks against civilian populations in northeastern Nigeria and its neighbouring countries have forced “a staggering” one million children out of school in a conflict that has dealt “a huge blow for education in the region,” the United Nations Children’s Fund (UNICEF) reported today.

“Across Nigeria, Cameroon, Chad and Niger, over 2,000 schools remain closed due to the conflict – some of them for more than a year – and hundreds have been attacked, looted or set on fire,” UNICEF said. “In far north Cameroon, only one out of the 135 schools closed in 2014 has re-opened this year.”

UNICEF also reported that the number of children missing out on their education due to the conflict adds to the estimated 11 million children of primary school age who were already out of school in the four countries before the onset of the crisis.

“The conflict has been a huge blow for education in the region, and violence has kept many children out of the classroom for more than a year, putting them at risk of dropping out of school altogether,” added Mr. Fontaine.

In addition, Nigeria alone, approximately 600 teachers have been killed since the start of the Boko Haram insurgency.

UNICEF said it has supported 170,000 children back into education in the safer areas of the three states most in Nigeria affected by the conflict, where the majority of schools have been able to re-open.

“The challenge we face is to keep children safe without interrupting their schooling,” said Mr. Fontaine. “Schools have been targets of attack, so children are scared to go back to the classroom; yet the longer they stay out of school, the greater the risks of being abused, abducted and recruited by armed groups,” he explained.

So far, UNICEF has received 44 per cent of the funding required in 2015 to respond to the humanitarian needs of children in Niger, Nigeria, Cameroon and Chad.

And in 2016, UNICEF will need nearly $23 million to provide access to education for children affected by conflicts in the four countries, most of whom live around the Lake Chad region. 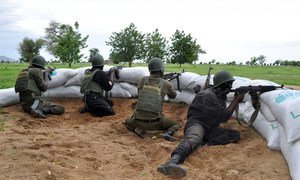