UNHCR/Mark Henley
Syrian man carrying a baby along the highway with other refugees, several kilometres after leaving Budapest, Hungary, heading in the direction of Vienna, Austria.
21 December 2015

The United Nations refugee agency, together with two European partners, urged Hungary today to refrain from policies and practices that promote intolerance, fear and fuel xenophobia against refugees and migrants, including a campaign running through Christmas and into the New Year.

The organizations – The Office of the UN High Commissioner for Refugees (UNHCR), the Council of Europe and the Office for Democratic Institutions and Human Rights – “have joined voices to call on the Hungarian leadership to adopt the true spirit of humanity in helping those who have been forced out of their countries against their own will and choice and are currently seeking safety in Europe,” according to a joint press release.

According to the UNHCR, the Hungarian Government launched a new public campaign in December portraying those fleeing war and conflict as criminals, invaders and terrorists based on their religious beliefs and places of origin.

“Not the first of its kind in the country, this campaign also targets migrants and plans to run for two months through Christmas and into the New Year in 2016,” it said.

“The Organizations are collectively stressing the need for the Hungarian Government to acknowledge that refugees are coming to Europe, after having endured trauma, tragedy and loss while searching for hope and dignity to start a new life far from the upheavals of war and conflict,” the joint release said.

“As part of the common European system, Hungary is looked upon to contribute to the joint efforts in dealing with the continent’s largest refugee crisis since the World War II and to meet its international legal commitments in this area under both International law and the European Convention on Human Rights,” it said. 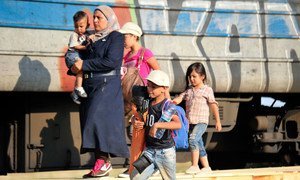 As Austria and Germany begin receiving thousands of refugees and migrants who crossed the border last night from Hungary, the United Nations refugee agency hailed the decision as “political leadership based on humanitarian values,” while also applauding Austrian and German civil society groups gearing up to assist people as they enter their countries.