“Should mediation efforts not restart immediately alternative options might be considered by the AU and UN,” the 15-member body said in a press statement on the Central African country, where an upsurge in violence has awakened fears of a relapse into the decades of war between Hutus and Tutsis that killed tens of thousands.

Burundi has been in the midst of a political crisis and conflict since President Pierre Nkurunziza decided to run for a controversial third term earlier this year, since when at least 400 people have been killed, with the toll possibly considerably higher, and 220,000 have fled to neighbouring States with many others internally displaced.

“Only a genuine and inclusive dialogue, based on respect for the Constitution and Arusha (peace) Agreement, would best enable the Burundian stakeholders to find a consensual solution to the crisis facing their country,” the Council said.

Noting the AU decision to deploy an African Prevention and Protection Mission in Burundi (MAPROBU), it called on all Burundian stakeholders to fully cooperate and urged African Member States to pledge troops and police for it.

It highlighted the utmost importance of UN contingency planning to develop options for the international community to respond to any further deterioration and of urgently deploying a UN team under the leadership of the UN Special Adviser to Conflict Prevention, Jamal Benomar, to work with the Government, AU and other partners to develop such options.

Just two days ago, UN High Commissioner for Human Rights Zeid Ra'ad Al Hussein urged the international community to take “robust, decisive” action instead of “fiddling around the edges” to avert a civil war in Burundi that could have serious ethnic overtones and alarming regional consequences. 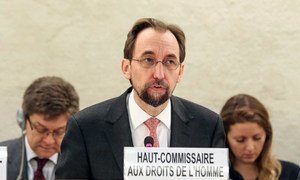 The top United Nations human rights official today urged the international community to take “robust, decisive” action instead of “fiddling around the edges” to avert a civil war in Burundi that could have serious ethnic overtones and alarming regional consequences.