FAO/Joan Manuel Baliellas
Villagers milling lumber for eventual manufacture of wood products such as furniture and even homes, for the local market, Back Kan, Viet Nam.
18 December 2015

Worldwide wood production has undergone a revival over the past year as it has seen the greatest leap since the global economic downturn of 2008-2009, according to the latest data released by the United Nations Food and Agriculture Organization (FAO).

Worldwide major wood production has undergone a revival over the past year as it has seen the greatest leap since the global economic downturn of 2008-2009, according to the latest data released by the United Nations Food and Agriculture Organization (FAO).

“We are seeing now the highest growth of the global wood industries in the last five years, which is important to national economies and the wellbeing and livelihoods of millions of forest-dependant people worldwide," said said Thais Linhares-Juvenal, head of the FAO’s Forest Economics and Statistics Team, while recognizing that “wood industries were among the hardest hit by the recent global economic downturn in 2008-2009.”

The new statisticsshowed that in 2014, major wood products, such as industrial roundwood, sawnwood, wood-based panels and pulp and paper, have increased from one to five per cent, surpassing the pre-recession levels of 2007. It is also noteworthy that the Asia-Pacific, region, and Latin America and Caribbean have the fastest growth in production.

Production of wood pellets, mainly used as fuel, increased dramatically in recent years, setting a new record in 2014 and growing by 16 per cent over the previous year, reaching 26 million metric tonnes. Europe and North America accounted for most global production and consumption, while the situation in Asia more than doubled in 2014 over the previous year, said the data.

The study also noted that in 2014, paper production stagnated in Europe and declined in North America, due to the prevailing use of social media. China, however, is by far the largest producer and consumer of paper and wood-based panels. Its paper production and consumption resumed growth in 2014, after a pause in 2013, driving the overall growing trend in the Asia-Pacific region.

South America, attributed for 30 per cent of worldwide exports of wood pulp, has gradually emerged as a new ‘big player’ in the global market, with new mills being built in Brazil, Chile, and Uruguay.

The Statistical Yearbook of Forest Products, published by FAO annually, aims to provide countries with informative tools to assess the forest products to global and national economies and sustainable development, and to improve their forest management and forestry policies. 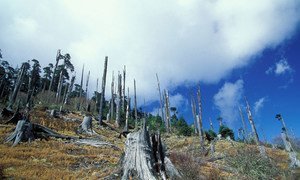 The impacts of climate change on forests and agriculture were in the spotlight today at the United Nations climate change conference (COP21), as new alliances among organizations and stakeholders were announced aiming to eliminate natural deforestation and forest degradation, and to prevent threats to sustainable farming and people’s livelihoods.