UN Photo/Cia Pak
A wide view of the meeting of the International Syria Support Group (ISSG) in New York.
18 December 2015

United Nations Secretary-General Ban Ki-moon today joined diplomats from the International Syria Support Group meeting in New York to discuss a solution to the country’s five-year war, and he is expected to brief the Security Council later today on the latest developments.

According to the Secretary-General’s spokesperson, Mr. Ban, accompanied by his Special Envoy, Staffan de Mistura, took part in the meeting outside UN Headquarters of the International Support Group, comprised of the Arab League, the European Union, the United Nations, and 17 countries.

After the Support’s Group’s 14 December meeting in Vienna, the participants, among other things, expressed a unanimous sense of urgency to end the suffering of the Syrian people, the physical destruction of Syria, the destabilization of the region, and the resulting increase in terrorists drawn to the fighting in Syria.

“The [group] acknowledged the close linkage between a ceasefire and a parallel political process pursuant to the 2012 Geneva Communiqué, and that both initiatives should move ahead expeditiously,” the statement noted, highlighting that the members also stated their commitment to ensure a Syrian-led and Syrian-owned political transition. 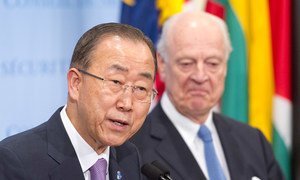 While members of an international support group for Syria engaged in “constructive dialogue” in Vienna on how to end the five-year conflict, UN Secretary-General Ban Ki-moon today said he is encouraged by the stakeholders reconvening to address the “grave situation” and bring about a political settlement to end the violence as soon as possible.