“Two important points to bear in mind here are that refugees are themselves fleeing persecution and violence, often including terrorist acts; and that the 1951 Refugee Convention explicitly excludes people who are combatants or who have committed serious crimes,” Adrian Edwards, spokesperson for the Office of the UN High Commissioner for Refugees (UNHCR) told the regular Friday press briefing in Geneva, Switzerland.

Mr. Edwards warned that with the “growing polarization of political debate…in some countries, the concern is that asylum-seekers and refugees could be victimized, and refugee protection – which has saved the lives of millions of people since World War Two – could be endangered.”

The recommendations presented today by Assistant High Commissioner for Protection Volker Türk, argues that national security and international protection for refugees are not mutually exclusive, and calls for an integrated approach that ensures both goals are being met, the spokesperson said.

“Arguably the biggest risk for any environment of insecurity is that of increasing xenophobia and vilification directed towards people fleeing violent conflicts,” he said, explain that the paper calls on States to exert continued resolute leadership in de-dramatizing and de-politicizing the challenges associated with managing refugee flows.

With cases involving the exclusion of people for serious criminal or terrorist acts, the paper recommends that a factual and legal assessment be done, if needed, by specialized exclusion units.

Resettlement and other forms of admission remains a key tool for providing refugees with safety and a solution to their plight, according to the guidance.

“In light of today’s record number of forcibly displaced people globally – some 60 million – the paper makes the point that it is more crucial than ever that resettlement and other forms of admission remain viable and effective options for the international community in dealing with refugees,” it said. 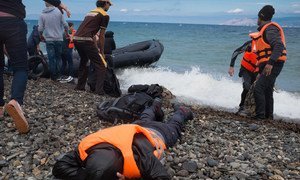