Every two seconds, a baby is born in a conflict zone – UNICEF

UNICEF/UNI179012/Alessio Romenzi
In January 2015, walking through snow, a woman carries an infant in refugee camp number 29, in the Bekaa Valley, Lebanon.
17 December 2015

More than 16 million babies in 2015 were born in conflict zones such as Afghanistan, South Sudan, Syria and Yemen or on perilous journeys to escape fighting, which translates to 1 in 8 of all births worldwide, or one newborn every two seconds, the United Nations Children’s Fund (UNICEF) said today.

“Can there be a worse start in life?” asked UNICEF Executive Director Anthony Lake in a news release, appealing to the world to translate promises made in historic agreements over the past year into action to benefit the most vulnerable children in 2016.

“The final months of 2015 have seen the world come together around tackling climate change and a new global development agenda. These ambitious agreements present a huge opportunity if we can translate our promises into action for the most vulnerable children,” he said.

“If we address the reasons so many families feel the need to uproot themselves and their children from their homes – by resolving conflict, by addressing climate change, by expanding opportunity, we can make 2016 a year of hope for millions – not a year of despair,” emphasized the UNICEF chief.

UNICEF said that in conflict-affected countries such as Afghanistan, the Central African Republic, Iraq, South Sudan, Syria and Yemen, or on perilous journeys to escape fighting, newborn children and their mothers face enormous risks.

Pregnant mothers are in danger of giving birth without medical help and in unsanitary conditions, and their children are more likely to die before they reach their fifth birthdays and to experience extreme – or ‘toxic; – stress, which can inhibit their long-term emotional and cognitive development, it said.

“Every two seconds, a newborn takes its first breath in the midst of conflict, often in terrifying circumstances and without access to medical care,” Mr. Lake said. “Too many children are now starting their lives in extreme circumstances – from conflict to natural disasters, poverty, disease or malnutrition.”

And in addition to conflict and poverty, UNICEF noted the effects of climate change and lack of opportunity are making children increasingly vulnerable and have pushed millions on dangerous journeys away from their homes.

More than 200,000 children applied for asylum in European Union countries in the first nine months of 2015, adding to the 30 million children across the globe forced from their homes by 2014 due to war, violence and persecution. More people are displaced now than at any moment since World War;

More than a quarter of a billion children – or 1 in 9 – live in countries and areas in conflict and face enormous obstacles to their health, education and well-being;

More than half a billion children live in areas where floods are extremely common and nearly 160 million live in high or extremely high drought severity zones; and

Children represent almost half of all people living in extreme poverty although they make up roughly a third of the world’s population. 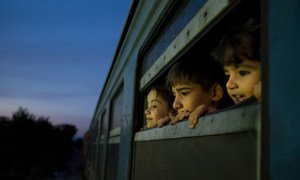 Marking Universal Children’s Day, the United Nations today highlighted that the world remains a “deeply unfair” place for the poorest and most disadvantaged children despite major advances since the adoption of the Convention on the Rights of the Child, 26 years ago today.