After ‘year of breakthrough and horror,’ Ban urges greater collaborative action to tackle crises in 2016

As 2015 draws to a close, United Nations Secretary-General Ban Ki-moon summed up the “pivotal year” in which the Organization marked its 70th anniversary by highlighting landmark steps taken to advance sustainable development, climate action, conflict resolution and provision of humanitarian assistance.

“The Paris Agreement on climate change is a sign of hope in troubled times. It is a triumph for multilateralism that shows the United Nations delivering results the world desperately needs,” said Mr. Ban in his opening remarks to reporters at his year-end press conference summarizing the activities of the UN system.

He also lauded French President François Hollande and Foreign Minister Laurent Fabius, who served as the President of the UN climate change conference, held in the French capital and widely known as COP21, for showing “inspiring leadership” and for refusing to be deterred by the terrorist attacks in Paris on 13 November.

“The Paris Agreement surpassed expectations. World leaders recognized that we could and must do better than settling for the lowest common denominator. So they reached higher. The Paris Agreement gives us ‘Plan A’ for the planet – A for ambition,” said Mr. Ban, highlighting the coherence seen during the UN climate change conference (COP21) this year.

After nine years of pushing hard for the agreement, the Secretary-General stressed that he will “press world leaders to translate promise into practice” by implementing it.

Turning to other milestones in 2015, the UN chief spotlighted the recently adopted 2030 Agenda for Sustainable Development and its “crystallized” 17 Goals which stand as an “overarching guide” to end poverty and build peaceful societies.

He also highlighted the significance of the Addis Ababa Action Agenda adopted in July which provides a blueprint for financing for development.

The UN chief stressed that investing in development early will avert crises down the road, for which the Sendai Framework on Disaster Risk Reduction, agreed in March, points the way toward resilience.

“Taken together, these plans and pacts have set the stage for a future that leaves no one behind,” emphasized the Secretary-General.

At the same time, Mr. Ban reviewed the situation of “epic flows” of refugees and internally displaced persons (IDPs) in 2015 and added that in the New Year “the world needs to aim for a new global compact on human mobility.”

“Demonizing and scapegoating people based on their religion, ethnicity or country of origin has no place in the 21st century,” he stressed.

Mother and children waiting with other refugees to enter Vinojug reception centre at Gevgelija, in the former Yugoslav Republic of Macedonia, at the border with Greece. Photo: UNHCR/Mark Henley

He also noted that the UN has appealed for $20 billion to meet next year’s humanitarian needs, which is five times the level of one decade ago. And while donors have been “exceedingly generous,” 2016 will likely begin with a funding gap of more than $10 billion – the largest ever.

Speaking about the World Humanitarian Summit to be held in May 2016 in Istanbul, Turkey, Mr. Ban said that conference will be critical moment to address systemic funding problems, and agree on concrete steps to better prepare for and respond to crises.

“The world must invest more political energy in preventing and ending conflict, and in addressing violations of human rights – our best early warning signs of greater trouble to follow,” said the Secretary-General, adding that the efforts made this week to resolve conflict through diplomacy are “front and centre.”

Regarding the Libyan peace talks, Mr. Ban said that parties are close to a “desperately needed agreement” that would help the country move beyond prolonged crisis.

As for Yemen, he noted the UN-sponsored peace talks that began yesterday in Switzerland to achieve a lasting ceasefire and resumption of political transition to end the bloodshed and ease the plight of civilians, who have borne the brunt of the conflict.

UN Emergency Relief Coordinator Stephen O’Brien, on visit to Yemen, talks with an elderly man who said his home was burnt to the ground during fighting. Photo: OCHA

Mr. Ban noted that the international community has actively re-engaged in pushing for a political settlement in Syria, and added that the International Syria Support Group will meet in New York on Friday, followed by a meeting of the Security Council. “Syria is an open sore on the Middle East and the wider world. We are pressing for a nationwide cease-fire and for the start of negotiations in January on a political transition – and we must not relent,” the Secretary-General stressed.

On extremism and terrorism, Mr. Ban said that it is crucial to counter threats posed by Da’esh (also known as Islamic State of Iraq and the Levant, or ISIL), Boko Haram, al-Shabab and other terrorist groups. “Next month, I will present to the Member States of the United Nations a plan of action on preventing violent extremism. Many of today’s conflicts – and often, unfortunately, the response to them – have provided a breeding ground for the spread of terrorism and violent extremism,” he announced.

The UN chief also expressed alarm at the escalating violence in Burundi and termed the events that took place in the past few days as “chilling.”

Warning that the country is on the brink of a civil war that risks engulfing the entire region, Mr. Ban announced that Special Adviser Jamal Benomar will visit the region immediately to speak to the African Union, the countries in the region and the Government of Burundi. “An inclusive political dialogue is needed urgently. We must do all we can to prevent mass violence and act decisively should it erupt,” he added.

Turning to South Sudan, the Secretary-General said the UN peacekeeping operation there continues to shelter more than 185,000 civilians, a major advance in human protection efforts, however, he added that this is not a permanent solution, as many more remain internally displaced and under threat of violence, and urged parties to establish the transitional institutions before the end of January.

Despite the “daunting” situations, Mr. Ban said that political progress and smooth transfers of power over the past year, including in Sri Lanka and Nigeria is encouraging. He also reported that the transition in the Central African Republic is moving forward, following the constitutional referendum held last week and presidential and legislative elections to be conducted at the end of this month.

Highlighting other progresses made, Mr. Ban said he was encouraged by the progress in the negotiations on Cyprus, and in Colombia where longest-running conflict in Americas in ending closer to the end. Additionally, Mr. Ban reported that Government and Army of Myanmar are cooperating with Daw Aung San Suu Kyi to ensure a stable transition.

Summarizing the year, Mr. Ban said that 2015 has brought “breakthrough and horror”, and added that the UN will continue to strengthen itself, including through wide-ranging assessments of peace operations, peacebuilding and our future role and capacities.

“Despite the ups and downs, from peace processes to climate talks, we cannot afford to let up. Too much is stake. Millions of people depend on us to keep pressing ahead. I did not lose faith during the years of ups and downs of climate negotiations. I continue to believe in the United Nations – and in our staff, many of whom have made the ultimate sacrifice,” said Mr. Ban.

Taking heart in the cooperation witnessed in Paris for COP21, Mr. Ban said that he will “continue to have faith in the ability of the world’s people to come together for the common good. With that spirit, we can make 2016 a year of accomplishment and truly build a life of dignity for we the peoples,” the Secretary-General concluded. 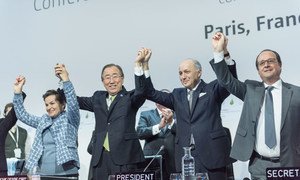