Following reports of increasing food shortage and hunger problem in Malawi coming from its communities and villages, the United Nations Children's Fund (UNICEF) is carrying out a mass screening for malnutrition in children under five across 25 districts in Malawi, which accounts for 90 per cent of the country.

“We want to make sure that every child suffering from malnutrition gets access to life-saving treatment,” said UNICEF Country Representative, Mahimbo Mdoe in a news release adding that although official figures say that malnutrition cases are not increasing, past experience indicate that this may not be the whole story.

Mr. Mdoe said that hungry and desperate families may not have the means or resources to take sick children to be assessed and through the mass screening, UNICEF plans to bring services to them, to ensure “no child is left out”.

According to UNICEF, Malawi has been struggling to cope with drought and the first maize deficit in a decade and the mass screening comes after a recent Vulnerability Assessment, which revealed 2.8 million people in Malawi are in need of urgent food aid, raising concerns as the country already faces a combination of challenges including food shortages, El Nino weather patterns, recovery from floods, a stagnant economy and a prolonged drought.

“Even if the rains are sufficient this growing season, families will still have to wait until March or April before the first crops are harvested. That is a further four months of food insecurity, when young children are at increased risk from disease or even death. As UNICEF we have to ensure that those children are seen, screened and if necessary treated for severe or moderate malnutrition,” said Mr. Mdoe.

According to UNICEF, Malawi adopted the community management of acute malnutrition (CMAM) approach in 2002 as the most effective way of treating malnutrition in young children which focuses on prevention at community level through raising awareness on malnutrition, screening all children and treating identified malnutrition cases using therapeutic milk and foods.

UNICEF estimation indicates that, nearly four per cent of the under-five malnutrition population in Malawi suffer from severe acute malnutrition (SAM), a fatal condition for young children, also noting that that there are discrepancies across the country, with the flood affected districts in the south currently showing much higher rates.

UNICEF said that even though its malnutrition screening and treatment programme in Malawi is available in over 90 per cent of districts, however only 50 per cent of the expected number of children are being seen and treated.

The UN agency also added that malnutrition figures coming from the districts show a stable trend, despite the food shortage, with the exception of flood hit districts of Chikwawa, Phalombe and Nsanje who recorded an increase of cases in the past 3 months.

However, UNICEF warned that as the 'lean season' reaches its peak between February and March, these figures are likely to substantially increase.

UNICEF noted that across parts of eastern and southern Africa, two back-to-back seasons of poor or non-existent rainfall, exacerbated by a strengthening El Niño weather phenomenon, are putting children at risk of hunger, lack of water and disease.

For example, in Ethiopia, over 10 million people are currently estimated to be food insecure, with projections indicating that this could rise to 15 million in 2016 and that 350,000 children could need treatment for severe acute malnutrition next year, according to UNICEF estimates.

The UN agency also added that in Somalia, around 855,000 people are in Crisis and Emergency phases of food insecurity with almost 70 per cent of those affected displaced by conflict within the country's borders, and in Zimbabwe, numbers of food insecure people are expected to triple by the time of the lean season in January to March 2016, peaking at 1.5 million.

UNICEF also added that children suffering in Malawi and across parts of eastern and southern Africa due to climate-related droughts and floods must be put at the forefront of discussions in the final hours of the talks in Paris at the UN climate change conference (COP21).

Lastly, UNICEF said that the mass screening for malnourished children is supported by the UK's Department for International Development (DFID), and is one of several emergency response activities in the country, including food ration distribution supported by the World Food Programme. 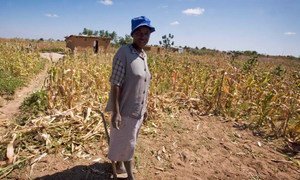 Following the devastating impact of El Niño, the United Nations relief wing has announced that the UN Central Emergency Response Fund (CERF) has provided some $76 million for life-saving activities in response to drought, drought-like conditions, floods and related insecurity, and other disasters in East Africa, Southern Africa, the Pacific Islands, South East Asia and Central America throughout 2015.