<a href=http://bit.ly/1RQy1OK>Jim Huylebroek/IRIN</a>
Afghans start their journey to Europe in trucks on this road in Afghanistan's Nimruz Province near the border of Iran in October 2015.
15 December 2015

Amid increased levels of violence in Afghanistan that has now spread across a large part of the country, the United Nations Deputy Special Representative there, reported today overall progress in the ability to provide relief aid to those in need, as all parties to the conflict have shown an increase respect for humanitarian laws.

“For the first time, we have noted that the Taliban had made a statement about a unilateral ceasefire to allow assistance to reach all the people of Afghanistan. This highlights the fact that there is an overall concern that humanitarian assistance needs to be provided for all the people of Afghanistan based on their needs alone,” said Deputy Special Representative of the Secretary-General for Afghanistan, Mark Bowden, in a press briefing at UN Headquarters in New York.

Mr. Bowden added that the ability to deliver assistance in Afghanistan has improved over the last year and added that it could be possibly continued even in the coming year. “This comes from a better recognition the international humanitarian law by all parties of the conflict. And that means that despite a difficult security situation, the ability to meet the needs of the population are there,” he added.

Mr. Bowden noted that the rise in violence has been more noticeable since the handover of security from international forces to Afghan security forces.

“The conflict is changing in nature, in the way it is being fought and the impact is primarily on civilian population […] also, there has been a change in control of areas. Twenty-three districts' administrative centres in 2015 have at one time or another been captured compared to [only] three in 2014,” he stated, highlighting the differences in the level of conflict.

Mr. Bowden, who is also the UN Resident and Humanitarian Coordinator for Afghanistan, said that an estimated 6.3 million Afghans have been affected by the widespread conflicts and displacements that are occurring at a rapid pace with nearly 196,000 people fleeing their homes during the last year.

He added that by the end of the year, an estimated 200,000 people would be displaced, marking a 64 per cent increase in that population from 2014.

Afghanistan, Mr. Bowden continued, is plagued by many natural disasters, such as recurring floods that displace many people every year; and in 2015, the earthquake in Badakhshan province had added to the humanitarian burden.

On a positive note, he reported that in the last year there was a reduction in the number of attacks against humanitarian workers, humanitarian organizations, schools and health centres.

He also said that the international community responded well to the crisis in Afghanistan, with the current humanitarian assistance programme being funded up to 70 per cent, which is one the highest levels of response of the humanitarian appeal.

Looking ahead to the coming year, the Deputy Special Representative said that one of the critical factors that would need to be addressed is to be able to respond to the spikes in humanitarian need, such as a surge in displacement.

Citing the example of the recent attacks in Kunduz, Mr. Bowden said the UN had been able to provide non-food items and immediate support to the displaced due to availability of adequate contingency stocks and the financial mechanism to provide rapid assistance.

“I think we will need to be prepared for the same sort of situation to occur in the coming year, which is why the common humanitarian fund is going to be a critical element of our response… [as it will be] the mechanism that will enable the humanitarian community to respond nimbly to meet the needs of any potentially large displacement that takes place,” said Mr. Bowden.

Expressing concerns at the increasing migration out of Afghanistan, most notable in Europe, Mr. Bowden said most of those migrants are driven by economic circumstances in a country where the economy has shown no signs of growth. But it is also fuelled by continuous population displacement from the rural areas and urbanization, he added.

He said the UN will be looking over the next year to address the migration issues, especially the number of returnees to Afghanistan.

“Pakistan has 1.4 million undocumented Afghans there who are at risk of being returned. The capacity of Afghanistan to cope with that number or the numbers of returnees is quite limited,” Mr. Bowden concluded. 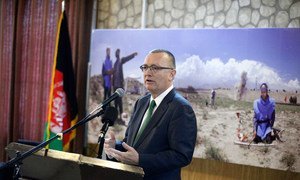