South Sudan: more UN peacekeepers to be sent in to protect civilians amid ceasefire violations

The Security Council today increased the United Nations peacekeeping force level in strife-torn South Sudan by over 1,000 to a ceiling of 15,000 troops and police, and extended its mandate for another six months, citing protection of civilians “by all necessary means” as its top priority.

In a resolution adopted just two weeks after the top UN peacekeeping official called for the increase in the face of repeated ceasefire violations by both the Government and opposition, the 15-member body asked Secretary-General Ban Ki-moon to prioritize the complete deployment at the new level, including tactical military helicopters and unarmed unmanned aerial systems.

The UN Mission in South Sudan (UNMISS) was originally set up on the eve of the country’s independence in July, 2009, with an initial ceiling of 7,000 and a mandate to support the Government in peace consolidation by fostering state building and economic development.

But both ceiling and mandate changed radically two years ago when a conflict erupted between President Salva Kiir and his former Vice-President Riek Machar, killing thousands, displacing over 2.4 million people, tens of thousands of whom have sought refuge at UNMISS bases, and impacting the food security of 4.6 million.

UNMISS currently has some 12,500 uniformed personnel on the ground.

Today’s resolution voiced grave concern that according to reports “there are reasonable grounds to believe that war crimes and crimes against humanity, including those involving extrajudicial killings, rape and other acts of sexual violence, enforced disappearances, the use of children in armed conflict, arbitrary arrests and detention, and attacks on schools and hospitals have been committed by both Government and opposition forces.”

It asked Mr. Ban to develop a plan for UNMISS “to take appropriate action to deter and respond to any escalation of violence in and around Juba (the capital), in order to effectively protect civilians, and to protect critical infrastructure.”

To deter violence against civilians, it called for “proactive deployment, active patrolling with particular attention to IDPs (internally displaced persons), including but not limited to those in protection sites and refugee camps, humanitarian personnel and human rights defenders, and identification of threats and attacks against civilians.”

It also urged a mission-wide early warning strategy, including information gathering and monitoring, to counter threats and attacks against civilians, as well as full investigation of abuses against children and women, including all forms of sexual and gender-based violence.

Warning the Council that South Sudan is at a critical juncture, Under-Secretary-General for UN Peacekeeping Operations Hervé Ladsous called for an increase in UNMISS forces earlier this month. 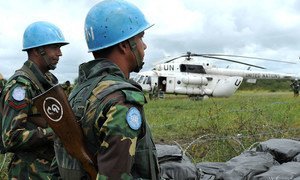 With both sides repeatedly violating the ceasefire, endangering progress so far made towards a political transition, the South Sudan peace process is at a critical juncture and in need of increased international support, the top United Nations peacekeeping official warned today.