‘At time of great division,’ unity on Paris climate accord must be built upon – UN Assembly President

The President of the 193-member United Nations General Assembly today vowed to begin the hard work of carrying out the Paris Agreement on climate change, reminding the world that at a time of great division, the unity, leadership and collective responsibility demonstrated in the French capital should not be forgotten.

“And we must encourage climate actors to embrace opportunities for action, partnership and investment that drive implementation of the broader poverty eradication and sustainable development agenda,” said said Mogens Lykketoft, as he briefed Member States on the conference, widely known as COP21.

Secretary-General Ban Ki-moon also spoke to the Assembly this morning on a session on the outcome of the climate change summit, which ended in Paris over the weekend, as well as on the Sustainable Development Goals (SDGs).

The UN chief called the Paris Agreement a triumph for people, the planet, and for multilateralism, because for the first time every country has pledged to curb their emissions, strengthen resilience and act internationally and domestically to address climate change.

Mr. Ban said that as a first step in implementing the Paris Agreement, he will convene a high-level signing ceremony in New York on 22 April of next year.

Assembly President Lykketoft noted that “at a time of great division in our world often linked to matters of resources, poverty, exclusion and climate stresses; this unity, leadership and collective responsibility should not be forgotten.”

“And a key part of this includes maximizing synergies between action on climate change and action on sustainable development goals,” he said.

Mr. Lykketoft outlined the concrete steps he will be taking to make sure that the Paris Agreement is implemented at a High Level Thematic Debate he will host in April, which will address this and other issues crucial to realizing the SDGs.

He said the Member States will take this is an opportunity to look at the inter-connections between the broader Paris agreement and overall SDG implementation, and to share thinking on how to effectively integrate climate action into sustainable development strategies.

Second, “we will look at how best to catalyze some of the means of implementing the SDGs in terms of technology, information and communication and in terms of financing in all its aspects, but in particular for sustainable, resilient and climate smart infrastructure.”

And third, he said, “we will examine how best to foster accountable and transparent multi-stakeholder partnerships to support the 2030 Agenda.”

“I hope that it will help us to build on the great outcome in Paris and to drive early action to end poverty, address climate change and achieve sustainable development,” he said. 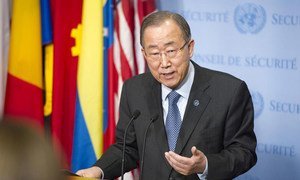 Calling the Paris Agreement on climate change “a health insurance policy for the planet,” United Nations Secretary-General Ban Ki-moon said today he never lost faith over his nine years in office that the international community could rise to the challenge and take steps to curb emission and boost climate-resilient growth.