After months of relentless violence in Yemen, consultations facilitated by the United Nations began today in Switzerland aimed at finding a durable settlement to the crisis, including establishing a permanent ceasefire, securing improvements to the humanitarian situation and a returning to a peaceful and orderly political transition.

The talks kicked off with the announcement by the UN Special Envoy for Yemen, Ismail Ould Cheikh Ahmed, that the parties had agreed to a cessation of hostilities.

The UN Secretary-General, Ban Ki-moon welcomed the talks and added that peaceful and inclusive dialogue is the only way to end “suffering and rebuild confidence, trust and mutual respect amongst the Yemeni people following months of civil war and thousands of lives lost.”

Additionally, Mr. Ban said he was encouraged by the letter he received yesterday from the Yemeni Women's Pact for Peace and Security and joined them in expressing hope that the talks will result in the end of the military conflict in Yemen and mark the country’s return to the path of sustainable peace.

“He reiterates the necessity and value of women's meaningful participation in the peace process, in accordance with Security Council resolutions 1325 (2000) and 2241 (2015),”said the statement.

Further, the UN chief urged all parties at the peace talks to engage constructively and in good faith with each other and called on them to safeguard the national interest, agree on practical steps that will end the suffering of the Yemeni people and improve their daily lives.

Mr. Ban also encouraged all countries of the region and other United Nations Member States to create a conducive environment for the talks.

Welcoming the declaration of cessation of hostilities among the parties as a “critical first step towards building a lasting peace in the country,” Mr. Ould Cheikh Ahmed stressed at the same time that finding a durable solution is critical, warning that “anyone who does not participate in the solution is effectively helping to perpetuate the crisis.”

“The cessation of hostilities which was called today should mark the end of military violence in Yemen and the transition to progress based on negotiations dialogue and consensus,” said Mr. Ould Cheikh Ahmed, who added that making peace is a fundamental requirement to rebuild Yemen, rehabilitate the basic infrastructure, address the consequences of the war, provide the necessary environment to normalize life in all governorates, and resume economic activity.

The talks are being facilitated by the Special Envoy and attended by 24 Yemeni representatives and advisors. UN experts are working with the delegations present to provide support to develop agreements which improve humanitarian access and delivery and to aid in the development of a comprehensive and permanent ceasefire.

In his opening remarks to the consultations, Mr. Ould Cheikh Ahmed said Yemeni people of all groups – men and women of all ages and communities – are undergoing unprecedented suffering as their beloved county “is being consumed by the flames of violence and armed conflict.”

“Here I would like to pause and reiterate once more that the only solution is a political one and that violence must cease. You have already effectively taken the necessary first step in that direction by agreeing on the cessation of hostilities, he said, stressing however that while there can be no doubt that that was a real achievement, the most important thing now is to focus efforts during the coming week on reaching a permanent and comprehensive ceasefire.

“Moreover, should any violation occur, I would invite you to address that situation immediately and in a constructive and practical manner,” he underscored.

Mr. Ould Cheikh Ahmed went on to say that the people of Yemen are daily, indeed hourly, anticipating the outcome of the discussions. “This meeting is their only glimmer of hope and must not be extinguished,” he said, asking the participants: “Are you going to abandon Yemen and its people and lead the country into further violence and slaughter, or are you going to put Yemen first, awaken your humanitarian and patriotic consciences, activate the role of the institutions, and ensure the people of Yemen can live the dignified life they deserve?”

He explained that based on previous discussions, the purpose of the talks is to create a general framework for a comprehensive agreement on how to put an end to the crisis.

All were present to achieve a common goal, he said, namely to put an end to the armed conflict and return the country to an orderly, peaceful, political process based on UN Security Council resolution 2216 (2015) and other related Council texts, as well as the initiative of the Gulf Cooperation Council and its operational mechanisms and the outcome of the National Dialogue Conference.

“Moreover, I urge you to work at the same time on the issue of providing urgent basic services to the Yemeni people. I therefore invite you to work with the colleagues here present from United Nations humanitarian agencies to guarantee unconditional and unrestricted access to humanitarian supplies throughout Yemen,” Mr. Ould Cheikh Ahmed said, recommending that the participants consider the practical steps that could be taken right away to provide vital services, revive the economy and facilitate the return of Yemeni refugees and displaced persons. 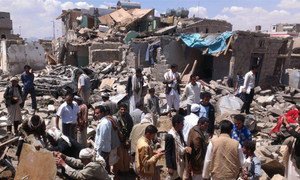 After several weeks of intensive consultations with the warring parties in Yemen, as well as with regional and international players, the United Nations Special Envoy for the country today announced that the parties have agreed to open on 15 December in Switzerland, a series of talks aimed at establishing a permanent and comprehensive ceasefire.